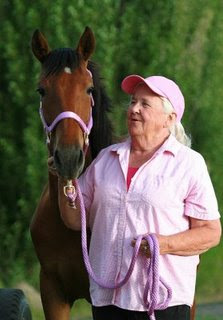 I want to draw attention tonight to a very special Mustang Gentler from my area here in Spokane who is in Reno this week competing in the Wild Horse Expo. You'll love Lea's blog--which I only found out about recently, though her reputation proceeded her in Mustang circles.

Here's an excerpt from Lea's training:

I reached up to put the halter on her and a big gust of wind came and she thought she was Pegasus I guess and whirled and bucked and caught me with her hind foot in my ribs. Knocked me head over tea kettle. Scared me more than hurt me and then she came up and put her nose on me while I was on the ground like "why are you down there". Pulled on my shoe laces and stood there. My camera had gone flying and I did not know where it was.

Here is a little blip about the Wild Horse Expo--she'll be competing this Friday:

To help educate people about wild horses, the National Wild Horse Center will conduct the largest wild horse and burro show in the country, as the future of mustangs faces new threats.


Bart Lawrence, the agency's vice president, said he hoped that people would begin to see the mustangs as an "American symbol."

"They deserve as much," Lawrence said.

The Western States Wild Horse and Burro Expo, Aug. 15-17 at the Reno Livestock Events Center, will feature clinics and contests for mustang and burro owners.

The clinics allow owners or potential adopters to ask questions about keeping wild horses, demonstrating the training process of the former wild animals.

The expo includes shopping and a show from Tommie Turvey, a world-renowned horse trainer, and his mustang, Blade, a silent auction of mustang yearlings and an open auction of saddle-trained horses.

Proceeds will go toward adoption, rescue, education and training services for wild horses and burros.

While the expo has been around for 17 years, this year's event comes during a debate spurred by their large numbers in the wild and in captivity. With more than 33,000 wild horses in holding facilities in the Midwest, the Bureau of Land Management is considering euthanizing some to offset the high costs of keeping them, which will approach $30 million this year.

An additional 30,000 reside in 10 Western states, and BLM officials said the agency intends to continue gathering the horses to keep their numbers in the ranges low.

Part of the effort to prevent the mustangs' deaths are encouragements from the BLM and outside organizations for more people to adopt the horses.

By exposing people to the horses in this setting, it shows people that the mustangs are not "wild" in a dangerous sense, Lawrence said. People will have the chance to see the horses and interact with them, whether by grooming and feeding them or watching them in the barrel contests.

"We want people to see the viability of these horses," he said. "It makes a difference, if one person who was considering getting a horse decides to go with a mustang. Maybe if we show people what amazing animals they are, they can put pressure on the BLM to go with other options."


Lea William's blog: Here is a link to her blog.

Please donate anything you can to help defer her costs--as little as 10 dollars would probably help with gas being so high.