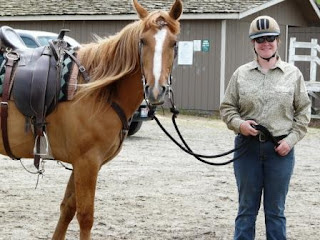 Steve Bohn & two of their mustangs from www.spanishhorsesoffallon.com 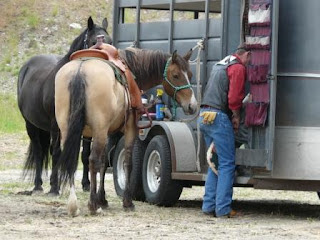 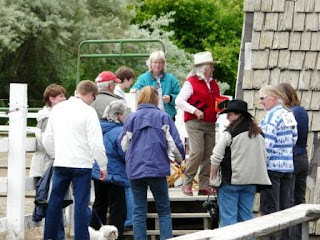 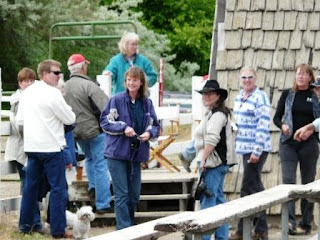 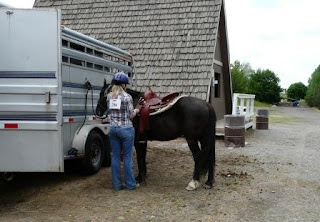 Wow. Mustang Days. The Yodas of the Mustang World all gathered together.

Unfortunately, I only got an hour with them, if you can believe it. Saturday was raining like crazy and we put it off to Sunday. Then, Sunday I had to fit it in between a trip to Home Depot and another meeting for Moms, Daughters & Horses.

I'm just glad I went! I met Andrea in person for the first time and got to meet Tonka, too. I've been following her blog since before adopting a mustang was even a distant, distant thought. (Was it ever a thought??) And, Andrea has been there to offer encouragement and advice since we brought Beautiful Girl home. (Hopefully, you stop by this week!!)

I met Bob and Lea, too. Lea was the only one chosen from Washington state to do the Mustang Makeover, so I'm hoping to get to her place to watch and soak up wisdom. Bob, too, had advice for us now that our mustang is without a halter.

Lori and Steven Bohn (www.spanishhorseoffallon.com) had some words for us--get those feet trimmed because Beautiful Girl and some of the other yearlings looked cow hocked at the sale, worm her, and take the time to earn her trust.

Steve Bohn sat in his mustang's stall with food and waited for her to come up to eat--then would reach out and touch her--and she'd get food as a reward. They say that when the light finally goes on that touch is not bad and you're not going to hurt them, things move fast.

I tried this today and it didn't work--yet.

I'm going to do it over and over again until it does. Today I gave up and just let her eat. It's funny though, when you introduce a new element into your training, like reaching out to touch her before I surrendered the food, it got her thinking. I had turned around to look at my other project horse, Jasmine (see picture below), and when I turned back toward her, she had moved real close and was smelling my head. I think she knows she's going to have to accept this touch thing--so now she's trying to decide just who and what I am. When it comes to her food--she's pretty brave.

Now, all of these techniques are coming in handy with my horse, Jasmine--a "wild" pony. When I adopted her last July from a friend, she didn't know much if any of the history of Jasmine having just adopted her herself about a year ealier.

Jasmine was supposed to be eleven, extremely people shy and was on to all of our tricks. I decided NEVER to trick her. Now, from July until today my progress has been that she will stand and let me halter her, go on walks and groom her--oh, and pet her. She used to flinch every time my hand touched her--and would flinch 100 times or more and never stop. If I entered her pen back then, she'd run from me so that I couldn't ever catch her to get her halter off. I left it on, but eventually could take the lead rope off and on. Today I can walk right up (in a stall) and throw the lead rope over her and halter her and groom her. So, I'm happy with her progress.

But I want her to come up to me in the pasture. This is my goal. I'm starting to use the same techniques I do with the Mustang and they seem to have the same effect. The Mustang is helping me to help Jasmine. Since I don't know Jasmine's history, I don't have any idea where she's from or what happened to her. The end result is the same though, she doesn't like or trust humans. At least Beautiful Girl seems to like humans, and I hope Jasmine will learn to like more humans, too.
Posted by Linda at 2:10 PM