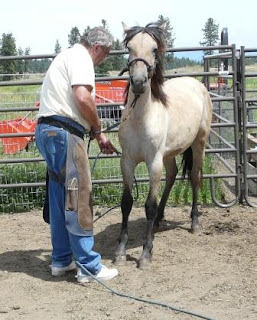 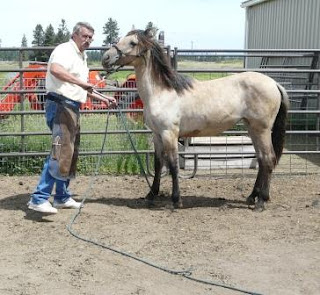 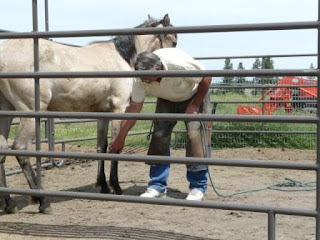 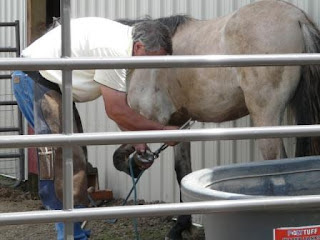 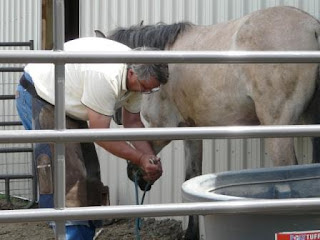 Today was "Trim" Day--"T" Day as I'll always remember it. I did not, in my wildest dreams, know how Scott was going to pull this one off without sedation, but he said not to do it.

When he started out and she wouldn't let him anywhere near her head or feet--I thought he was going to walk away and never come back--basically fire me as a client!!

But that's not how it happened at all. He knew exactly what he was doing and he went to work with patience, kindness, and wisdom.

First, he wanted her head--he wanted her to acknowledge him. Second, he wanted her feet. Two hours later he had all of her and could lead her around the pen, pet her face on, and pick up those feet and do his work.

When he gave her back to me she was so happy to be by her mama--she followed me around and wouldn't leave my side.

My farrier is phenomonal. He can train horses as well as trim them. He is a four time National Champion Farrier. He has his own magazine--Pro Farrier Today--he trains farriers from all over and he is the former VP of the American Farrier's Association. He chose us as clients rather than vice versa. Our vet referred him to us for Cowboy's P3 and after working on him a couple of times he said he'd decided he'd be our farrier.

Today we realized how lucky we were he let us be his clients. And, my mind is totally at rest about Beautiful's feet.

I asked him why he was against sedation and he said he doesn't ever trick a horse. It would be like giving her a date-rape drug, as far as he was concerned. The only way he wanted to do her feet was if she allowed him to do her feet. So, he made it very uncomfortable for her to be anywhere but by his side.

About her feet, he says she'll be just fine--her feet are upright anyway--she's an upright horse, but her conformation supports the feet--they go together. He said because she's upright and taller in the hind than the front--and hasn't ever been trimmed--she has been more on her toes and less on her heel. But he brought her heel down and will continue to do it as he can.

I am sooooo happy today. She's an absolute sweetheart--despite throwing herself over backward and once striking his arm--even Scott agreed she has a good temperment and isn't a mean horse at all.