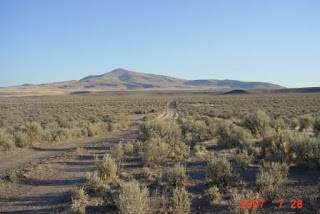 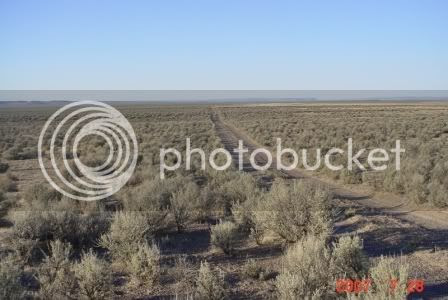 Okay, Beatty Butte, Beaty Butte, Beaty's Butte--whichever it is, and I think it varies depending on person, here are some pictures of that area last summer--a month before Beautiful Girl was captured.

Lately, with the cost of everything going up--especially hay--people are evaluating their herds more than ever. There has been a backlash against frivolous breeding--fugly horses with defects and what have you, but how can anyone question the value of the Mustang? It has proven its own value by surviving.

I was told by a friend who had a Connamera/Arab Cross, that the Irish Connameras were released every year to see which horses could survive, and only the ones who thrived in the rugged Irish wilderness were bred.

Why isn't this still the way we assign value?

I love all my horses, the ones who would survive in the wild and the ones who wouldn't, but you have to take your hats of to the Mustang. Maybe every "official" breed should have a bit of the wild horse introduced back into it from time to time. Don't you think?

******THANKS to Debby Jackson who sent me these pictures--she's an awesome BLM volunteer we met at the adoption. Here as an excerpt of her letter to me answering some of my questions.

If she is eating out of your hand already thats great. You are going to have one heck of a horse when you get done. Don't expect everything to come fast because even if it comes slow, in the end you will have a very trustworthy horse! The Bond is great! As for your questions, the other horses go back to Burns and will go to the next adoption in Pasco then any left over will go back to Burns and on to other adoptions in other states. There are walk up adoption also right at the pens in burns. The Beattys Butte herd we rounded up due to lack of water. Horses are usually gathered because of Lack of water, feed, overgrazeing the area, not only by horses but deer, and cattel as well, and to thin herds of over population.
I looked at property in that area and it is miles and miles of nothing. When they are rounded up in August it take several months to process several herds of horses before actual adopions that are usually starting in April. When the wildhorses are gathered, they are emediatly loaded into trucks by seperation of stallions, mares and baby mare pairs along with yearlings. Then at the pens they are further separeated if needed. Then processed which means vaccinated, branded, worming, doctored, and aged by teeth, and all this takes much time and paperwork before they can be adopted. As for the scar, it may have happened in the wild, or in the gathering of confusion?
Posted by Linda at 6:23 PM