Hitting the Trail with Tweed 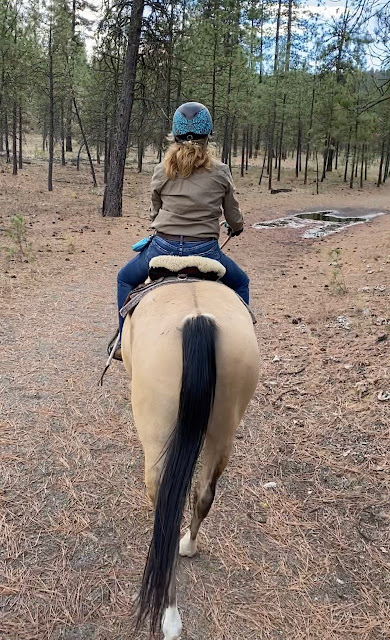 I finally hit the trails with Tweed yesterday, and everything went off without too much excitement. If you want to watch eight seconds of a quite boring video, here it is.

Of course, that little clip does not tell the whole tale. (I'm laughing now) What does it leave out? Mostly that Tweed is an aggressive little stinker who thinks every horse is a cow that needs to be bit and herded.
I went on the ride with a good friend who exhibited the utmost patience and allowed me to take all the time I needed and to choose the route. I didn't want anything too steep, because he is just learning to balance himself and a rider up and down hills. It's impossible to avoid hills at this riding area, but I deliberately chose the most solid footing when we had to go up or down.
I wanted him to lead and follow, but he wasn't keen on following, and that is when he showed his aggressive side. That is also where my kissy kissy training turned into kicky kicky training.  (insert more laughter.)  He's lucky old Mo is such a solid boy and tolerated his nonsense. There was some pinning of ears, too. None of this surprised me because it is the same behavior Tweed would show when I ponied him. He wants to be the big boss. I like his confidence, but not his bad behavior, and it is something I will be working on diligently so that he is a well-mannered trail companion. That is all part of the trail riding life--being good around other horses he may not know and tuning into me.
He's only three, and I worry about how long a trail ride should be at his age. He's not used to anything longer than 30 minutes. Our ride was about an hour and a half, with lots of time standing. He didn't like standing either, but when I'm out with the other cowgirls, he will have to get used to a lot of that. 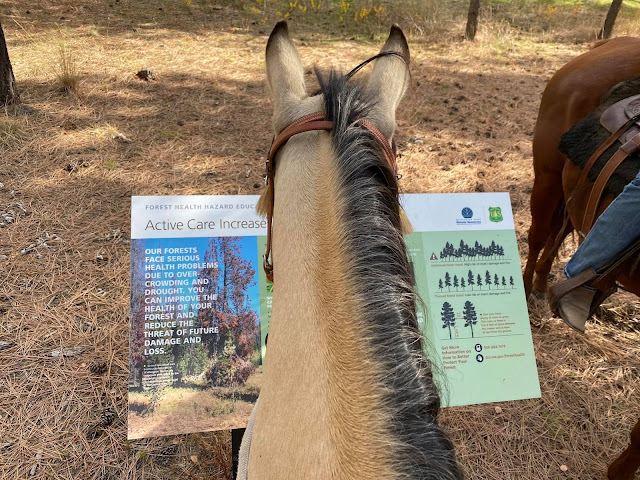 At one point, when he thought we'd been standing too long, he turned and bit my boot.
But you know, these were all small, manageable things. He didn't buck, balk, spin, or spook. He started out looky and reactive, but calmed after about ten minutes. That was all to be expected, because it was new for him. New horse buddy, new trails, new experience.
At one point, he saw the trailers, and he thought we were done, but I had purposely taken him that route to show him that just because he sees our trailer, it doesn't mean ride over. We went out on new trails. He showed some displeasure and poutiness, but he did it.  I remember when Leah was in the same situation, and she tried to bolt to the trailer. I had to spend an extra hour riding her out from it, back and forth, until she realized she wasn't going to get what she wanted. Tweed needed no such lesson, and I was relieved, because I didn't want to have to do that. And, when the ride really was over, I took him through a few obstacles, to further the point. 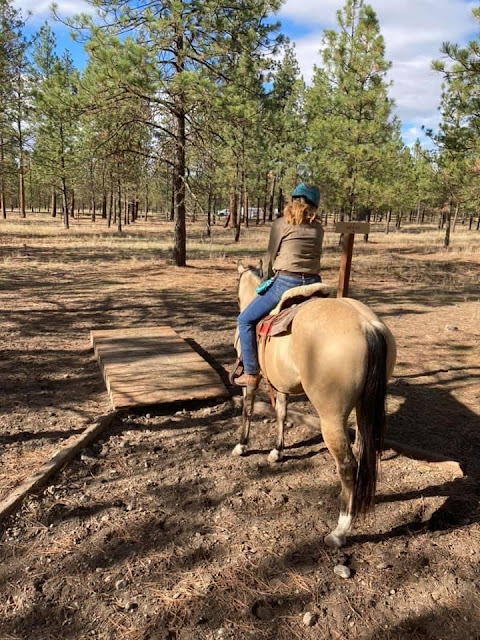 Nothing beats the trails for teaching, there are so many natural obstacles, and great learning experiences. The obstacle course does present a great opportunity to get them in the "thinking side of their head" before and after a ride though.
I haven't decided how much is too much when it comes to trail riding him at this age, but it is something I'm going to discuss with my trainer.  I feel like everything we did yesterday was well within the range of what he can handle, but the wider trails we usually take will be more steep. We probably have 1 to 2 more months of trail riding weather, and then we will back to working at home for the winter, and more training next spring in his 4 year old year.
He is going to one heck of a fun horse to ride, and I am looking forward to our future.
Posted by Linda at 5:41 PM