Turning My Thoughts to Tweed 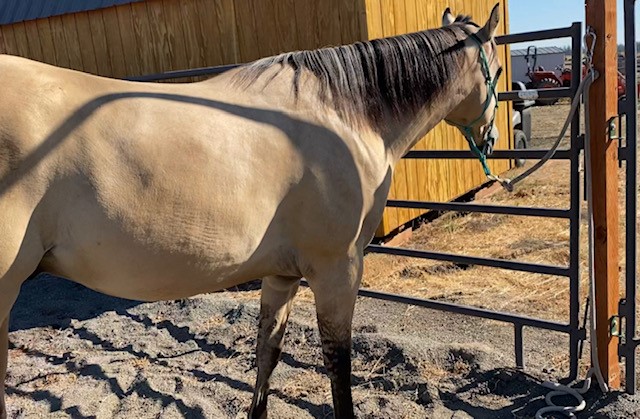 My work with Tweed has been spotty these last couple of months: heat, smoke, and Epona kept me from being regular, and because of that, each time I went out, I saw a deeper and deeper deficit from where we needed to be and where we were.

I have his heart, but that's partially because the way to your gelding's heart is through his stomach. When I go out to get him in the evenings, I only need call his name, and he comes running. If I go out during the day, with no intention to feed, he comes to me and gives me his undivided attention, too.  He associates me with good things, and offers zero resistance in our everyday interactions.

Scratch the surface, however, and resistance pops its ugly head right up. I have seen it when he has bucked on the line when asked to change leads, pulled back on the line, trying to get away, and bit at me, once, when I bent his head. (That last one did not go well for him!) As for the silliness on the line, I usually get through it, and then ask him to complete the task originally requested without much drama. When I ask him to stand at the mounting block, he will shuffle just a little bit away from the sweet spot, and act like he doesn't know what I'm asking. When dismounting the bridge, he will sometimes walk right off, rather than one foot at a time, as asked. In those cases, we circle back around and do it all over again, and again, and again.

These are all obvious forms of resistance, and negate the subtler question--Do I have his attention? (Before I get on.) It's clear, we have to start back at square one.

I'm back to working with him most everyday, but all those things have to be addressed, and they are combinations of issues:

2. He wants to get back with the herd.

3. He has physical discomfort which I have been searching out through the Masterson Method work. I hadn't done much of it with him, but I can see he really needs it. His evasion is moving, pawing, chewing the rope, and threatening to bite. Through this work he will learn that he can trust me with his ouchy spots, and release them. He's so sensitive that I've had to move back to "air gap" pressure. (I'll post specifically on this topic soon, because I will have to learn a way through his evasions that also supports the work--while enforcing my personal boundaries. That's not as easy as it might sound.)

He sees me as  herd mate. This is a boundaries issues, and has probably become worse because of our freetime, at liberty, in the pasture. Everything is on his terms (or, at least he thinks it is) when I go out to visit him during the day. He's also three, and still has that baby personality. He taunts the other horses all day long in the pasture. They all love him, and put up with a lot, but eventually they will discipline him and send him off. He is bringing that same attitude, pushing the boundaries, into the arena. This is going to work itself out quickly by working with him on regular schedule. It doesn't concern me. #2 wanting to be back with the herd, will also work itself with a regular schedule.

My emotional energy has been concentrated with laser focus on Epona's survival. That did not leave me much for my work with Tweed. Yet, even in that distracted state, I was formulating a general concern about a lack of partnership or, more accurately, togetherness. The thought started to seep in more and more as I thought back about our work since he's been home. You get a horse back from the trainer, but you're not the trainer. You do things differently than the trainer. And your relationship with your horse is completely separate, too. I had made a mistake in the earliest days after bringing him home of trying to start where she left off, rather than taking a few steps back and reestablishing our own mojo.

I was thinking about that today--what is the value of sending them off to training if you have to start from square one? The value that I can see is exposure. He has been exposed to many different things, and that created a foundation. However, that's all it is: a foundation from which to build our own partnership. Unfortunately, no one can do that part for you, and there are no shortcuts.

The weather has returned to normal here in Spokane, which is to say, perfect 70 degree days. It's gorgeous. Being in the barn, which is where I practically live, is now pure bliss. Less heat. Less flies. It's a good time to start back up.

Mr Tumbleweed and I have a lot to do.