It's Out of My Control 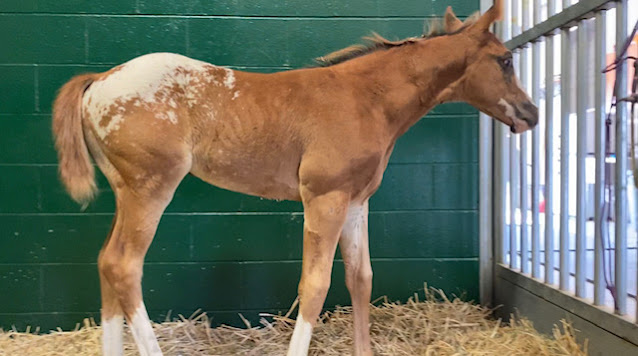 I have made it to all of the "visiting hours" for Epona. Her caregivers never fail to take a moment and give me updates, and they have gotten better each day.

She only had to have one IV, and since then has been drinking enough water on her own. They take blood tests every day to make sure that she's staying hydrated.

She is also eating more aggressively, and they said she eats everything they give her, which is timothy hay, milk pellets, and Omolene 300.

Unfortunately, she does aspirate when she stretches her neck to the ground, which is a similar stretch to nursing. Everything she eats and drinks has to be at her chest level. Hay doesn't seem to bother her, though--at any level.

She still does not receive antibiotics, as we're waiting for the culture to come back, but she hasn't spiked a fever, coughed, or shown any signs of being sick.

They put her in a stall that is front and center to where they do all their work, and that keeps her busy watching them all day. It also puts more eyes on her, something her doctor really wanted.

This morning, I went in and groomed her.

She whinnies as soon as she hears my voice approaching, and as I leave for the day. I do miss her when we're apart! Home isn't home without her anymore.

We had a chance to go hiking today, looking for huckleberries, and something miraculous happened. Honestly, I needed something miraculous, because yesterday I was really down. I had come to realize that the universe is, indeed, teaching me something this year. It is teaching me that I have no control over things.  No. Control.  I like control, and it isn't easy to come to such a realization. If not control, than what?

I wrote a short poem, as I tried to make sense of it. My feeling is that when I really learn the lesson I'm being taught, I might cease needing it reinforced. Here it is:

The universe told me
Our hands are empty,
They do not contain miracles
Or, even wise words.
Moment by moment,
Only moments,
The brokenness of hearts,
A temporary rise to our feet,
As if to help,
But we didn’t–Did we?
Because our hands are empty.
The baby birds. Epona. The hurting human beings around me. There are so many things out of my hands, though I tried so, so hard with those very hands to save them. I couldn't. It's not within my power to save things--or to even know the right words to bring comfort.
The miracle is this: 25 years ago, I found a strange flower under a tree on a hike. It was like an albino orchid, very magical, mysterious. At that time, I was into finding flowers, pressing them in a press I'd made for myself, and journaling about them. We'd often go in groups, with our kids, searching for as many wildflowers as we could find.  The one I found, in a cluster of 3, was so delicate and waxy. I picked it and placed it in my cooler to take home and press.
But by the time I got home, my little flower was completely ink black. It had, for all practical purposes, disappeared. Back then, there wasn't this big wide world of the internet or smart phones, and I hadn't taken a photo.
But I never forgot it, and I continued my search to find it again.
Through the years, I found out that it was Emily Dickinson's favorite flower. She wrote about it, and it is featured on her book of poems, as tribute. Indian Pipe. Ghost Flower. Corpse Flower. No chlorophyll. Monotropa uniflora. Family: Ericaceae, which contains huckleberry, blueberry & azalea. 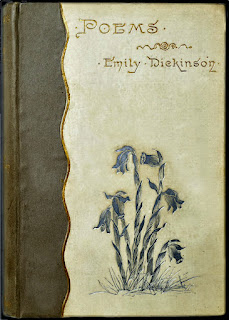 25 years, or more, and I had never found another indian pipe, another ghost flower, another corpse flower.
Until today!! 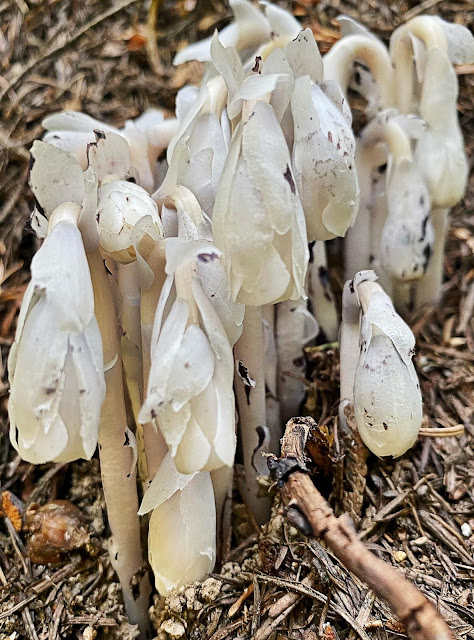 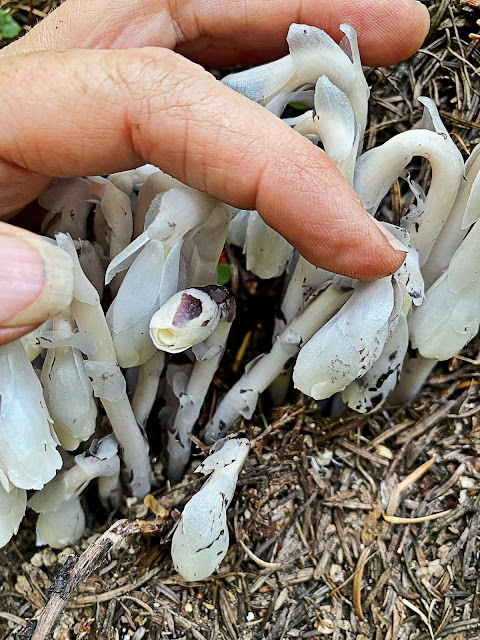 My son-in-law saw this little clump first. He said, Hey look at those crazy mushrooms! And when my head turned toward them, it was as if the heavens opened up. They were so white against the forest floor, and I knew what they were immediately. Within seconds I was on my knees on the bank, taking photos and feeling them. My family stood back in shock. Then, one by one, they came to see what was so special.
I waited a long time for this sighting. I've even told other people to be on the lookout for me. But it, too, was out of my control. These rare flowers do what they do.
Seeing them today was my miracle.
'Tis whiter than an Indian Pipe –
'Tis dimmer than a Lace –
No stature has it, like a Fog
When you approach the place –
Not any voice imply it here –
Or intimate it there –
A spirit – how doth it accost –
What function hath the Air?
This limitless Hyperbole
Each one of us shall be –
'Tis Drama – if Hypothesis
It be not Tragedy –
Emily Dickinson 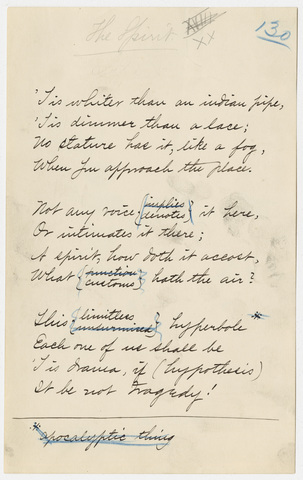