(Epona nursing a few minutes ago. Good or bad thing?)

We received our notes on Epona's visit from the treating vet, and are waiting for a call back to discuss options, should the milk replacement switch fail, which it seems to have done.

Here's what we're dealing with:

"Epona was seen today for recheck exam of persistent mild dysphagia and aspiration. Owners have rarely noticed coughing, but she does occasionally have a small amount of milk dribbling from her nares. She is eating some of the mare's food and starting to drink water. Owners have not noticed any drainage from her nose while drinking her own water, but she does have when drinking from mare's bucket positioned higher up.

PE: BAR, excellent BCS of 5/9, BW 220 lbs; normal auscultation of heart, lungs and abdomen. Normal auscultation of trachea at rest and for the first half of a nursing session, then she starts to aspirate a small volume of milk. She coughed once a couple of minutes after nursing.

Thoracic ultrasound: Minimal comet tails on the left side in the first 5 rib spaces; moderate comet tailing in the right cranial thorax to ICS 8, very similar to exam on 6/21.

Endoscopy (mild sedation required for procedure): Moderate positional dorsal pharyngeal collapse which improved with lifting the nose in the air; normal swallowing regardless of head position; small trail of milk/mucous in trachea.
No abnormalities found in guttural pouches.

Due to persistent positional dysphagia, we will have to transition to feeding Epona from a bucket and wean her from the mare. You can keep mare and foal together if you are able to fashion an udder covering to prevent the foal from nursing OR buy a foal muzzle and keep foal muzzled between feedings (she will still be able to drink water).

Milk Replacer Feeding: Please follow label instructions, but she should be eating about 18 L/qt of appropriately mixed liquid milk replacer, divided into 6 feedings per day. You can initially milk out the mare and add some of her milk to the mix to help the filly transition.

Milk Pellets: Feed as instructed per label instructions in addition to milk replacer liquid. You can soak them slightly initially to get her used to the texture.

I would like to recheck the filly in 10-14 days to ensure that pneumonia has resolved and that she is gaining weight adequately with milk replacer.

Please call if the filly develops diarrhea, or has difficulty switching to bucket feeding."

I feel like this is a good analysis of the situation, and switching her to milk replacer is a wise way to proceed, if we can do it successfully. But we took her off of mama at 9:30 pm last night, and didn't have any success with replacer by 12:45 this afternoon. We did get her to drink mama's milk, which we had nursed from Cowgirl ourselves, but only in small quantities, nowhere near the 18 quarts a day we need.

With temps at about 90 today, we didn't feel comfortable denying her mama. And, they're going to get worse in the coming days. We allowed her a short nursing session, then another about an hour later. My thinking is to keep her somewhat hungry, but hydrated, and keep Cowgirl's huge milk supply from drowning her. The last nursing was short, and no milk came out of her nose. I'm timing them at about every 45 minutes.

So, along those lines, I guess my question for the vet would be, is it better to keep her nursing, but separate her from mama more often, and introduce these new foods gradually?

The vet's thinking, about taking her off mama, is similar to when a mare dies--go cold turkey, and when they get hungry and thirsty enough, they'll drink. A friend told me I should remove Cowgirl so that she can't even see her. That's about impossible to do around here. They'd still be able to whinny at each other.

Is the risk of dehydration and stress, during pneumonia, greater than the risk of her continued aspiration?

I know they'd like to see it resolved, and it won't resolve until she's not nursing anymore. Yet, it seems like every decision has a good and bad side, a practical and impractical side. Maybe Epona is still just a little too young to make this transition well. Maybe, if we're going to choose this route, she needs to be hospitalized away from Cowgirl, and monitored by the vet during the transition.

Here's one of our failed attempts at covering the udders. 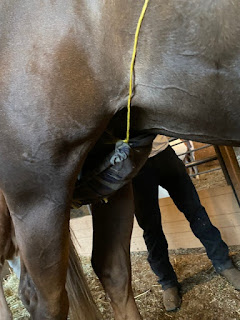 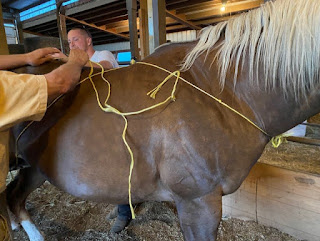 Soon after that, we decided to separate them for the night. 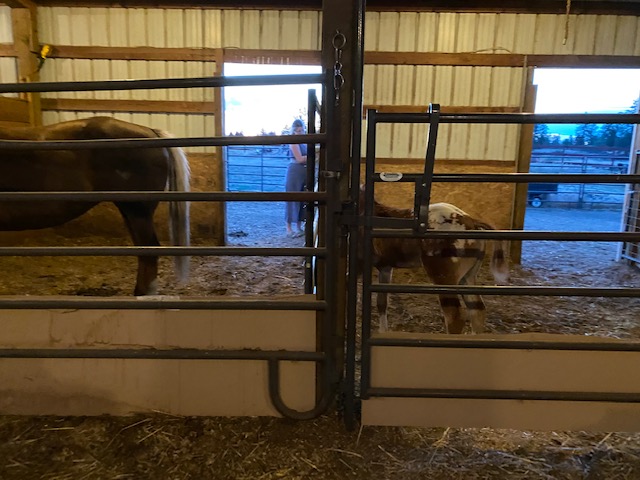 All of this has been was worth the try. Doing it at home, near her mama, is much less stressful than if we do take her to the vet to stay. Our vet has tried to make this as humane as possible for little Epona. She said we could keep them together, if we could cover Cowgirl's udders, but that proved to be impossible. (see above) I just saw that in her notes, she suggested a hay muzzle for Epona, and that would be great, except she'd be nuzzling at Cowgirl's udders all the time, and they are sore. (It's an excellent idea for when Cowgirl isn't as sore.)

Long story short, we just don't feel comfortable following the advice to get her hungry and thirsty enough that she accepts replacer. We know the vet is right, but we don't know how to get there safely, under these circumstances.

Does anyone have experience with milk replacer? We could only find Land O Lakes, ProNurse, which is a multispecies replacer. They didn't have a single option for Mare's Match or any of the others, formulated specifically for foals. In fact, they barely had the Land O Lakes. We had to go from store to store, buying it up. Is it because of the Covid shortages? 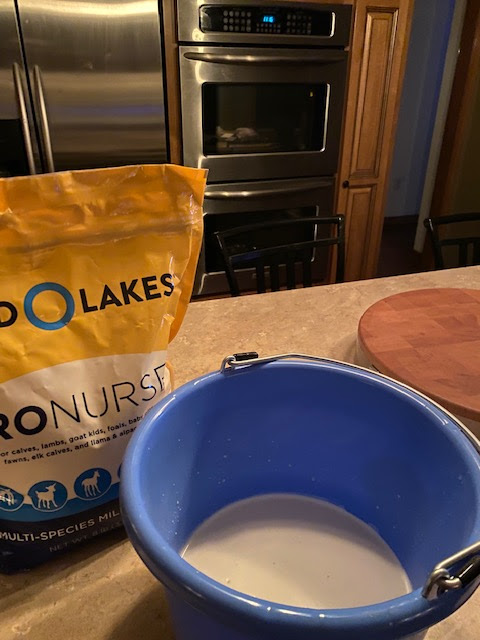 I would have much preferred an equine only formula. Epona hates this stuff. We invested hundreds of dollars into it yesterday, but I don't know that she will ever drink it.