The Birth of a Foal: Complication, Retained Placenta 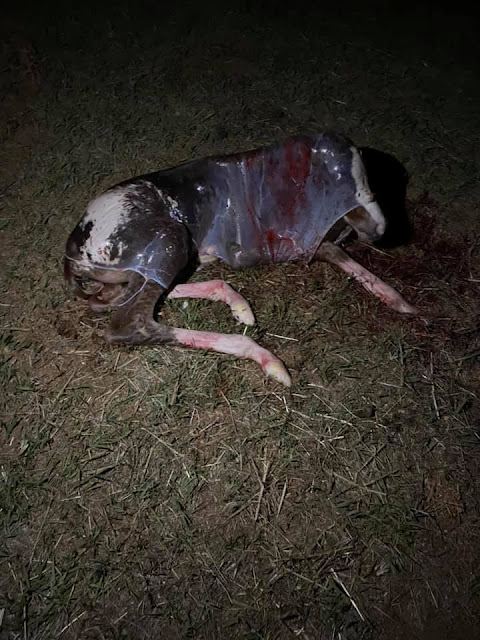 There is really something special about witnessing a foal being born to your prized mare. My daughter, Shiloh, bought Cowgirl as a weanling, and has paid for her care all these 17 years. She found her on DreamHorse. She spent her own savings to purchase her. When she was in school, she had to always pay half of her care, and when she moved out on her own, took over 100% of her upkeep. She is her heart horse. Cowgirl, in some ways, helped raise Shiloh, since Shiloh was only 12 when their lives merged together. Many a day, I would sit at our window and watch them race through the wheat fields, (after harvest they'd be a sea of stubble), behind our house.

When Shiloh moved out on her own, the care of Cowgirl reverted mainly to me, because I'm here and she's not, but we have always charged her board and upkeep, and she has dutifully paid Cowgirl's way and stops by as often as possible to see her--which is quite a lot! (Tip for parents who want to see their grown kids--keep their horse for them!)

So, this breeding was 100% Shiloh's desire to have a piece of Cowgirl that she can take further into her future. She bred her to a stallion of our friend, and trainer, who also shaped Shiloh's young life in a very profound way. We were all very close, and rode together everyday, and had women's lunches together--which Shiloh was always a part of. Shiloh trusted, and still trusts, Sarah's opinion in all things horse, and life, and potential studs. The joining of their two horses in many ways joined them, too.

All this is to say, it was not my choice to breed a horse and, as wonderful as it was to see the birth, at this point, I don't think I'd do it again.

In some ways, I worry to much. In other ways, too little. The problem with "worry", is that it can't anticipate everything. You worry about your mare rejecting her foal (I did), and she retains her placenta instead, and becomes the most wonderful mother you have ever seen! Mother nature is miraculous like that. She takes a 17 year old maiden mare and somehow gives her all the tools and knowledge she needs to raise her foal. When and where to birth it. (At night, perfect weather, in the clean grass). The baby hits the ground, she recovers from the shock and pain of the birth, then returns to clean off, and eat, the afterbirth around the foal. She nudges it. She smells and nuzzles it. She pushes it to its feet, and moves away, so the foal will have to follow. She gently pushes the foal toward her teats. It finds her tail instead. She moves around, and around, and around--guides, and guides--until the baby latches on. 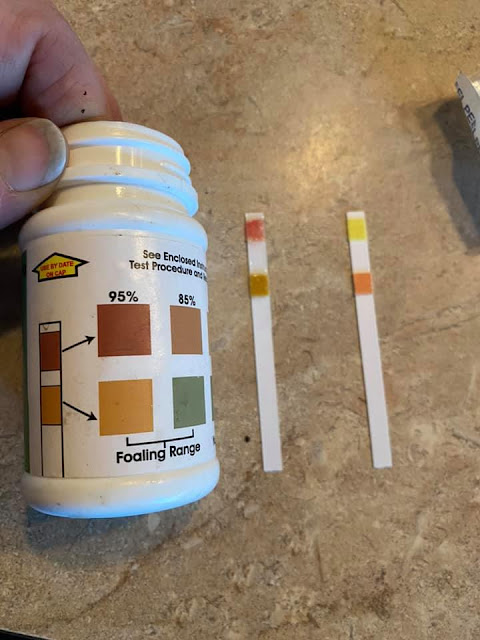 Let me backtrack to earlier in the day, after I had written my last post about her milk dripping / leaking, and the mares all gathering around like something big was going to happen. (Foxy has been a mama, and it turns out she knew what all that meant.) But we didn't. It could mean foaling, or maybe not. Our vet had told us that mares can drip milk even a month before they deliver. In retrospect, this did seem different. It seemed like the leaking was happening with contractions, but at the time, we didn't know.

A friend had given me some test strips with her foaling kit and told us that they had accurately predicted her foals, within 12 hours of delivery, every time. While Cowgirl was leaking, I took the opportunity to catch a bit of her milk and test it. I used the Mother Nature Mare Foaling Kit. As you can see by the center strip, the one with milk, it was a perfect match for BABY COMING SOON! (The right side strip is a strip with no milk on it, for comparison.)

I called my daughter and she packed her bags and came over with her husband. My son and his wife also showed up with hands full of board games--we were expecting to have a long, fun night of foal watch.

We had a waning full moon that Friday night, and it cast light out over the horizon until quite late. But when that light began to fade, down Cowgirl went in her stall, as we watched from the house on our cameras. Shiloh walked out to the barn to see what was happening while we popped popcorn for our fun game night. Shiloh came back to the house and ended the play--"It's coming! I saw it!" She looked quite shocked, as she didn't really believe my milk test strips were accurate, and she said later, I have cried wolf a few times.

It was hard to know what to do. When we went to the barn, she got up and left. We didn't want to get too much in her way, but we also wanted to see it. We ended up standing way back, outside of the fence, just Shiloh and I, while the others watched on the cameras from inside the house. Cowgirl chose a spot that was very dark, and isolated, and the baby plopped out into the grass. Cowgirl then walked away about 25 feet and went into a kind of shock. She stood there, looking out opposite her foal, and stomping one bag leg involuntarily. The afterbirth was hanging from her vulva in a long, thick strip.

At that point, we finally entered the turnout and got the photo at the top of this post. When Cowgirl saw us by he foal, it triggered her out of her shock, and she returned to it and began to clear the afterbirth and perform the motherly duties I told you about above. Nudging. Nurturing. Licking. Guiding.

After 3 hours, the afterbirth had not expelled, so we called our vet and woke him up at 2:20 am. (Baby was born at 11:20 pm.) He thanked us for waking him (not) and told us to tie the afterbirth in two knots and wait to see if it expelled by morning. I tied it into three knots, to get it far up off the ground from where it was still leeching bacteria, and germs, and bringing it back to the mare's uterus.

We then went back inside and got 3 hours of sleep, and woke to find it had not shed.

After another call to the vet, they told us to bring mama and baby into the clinic. 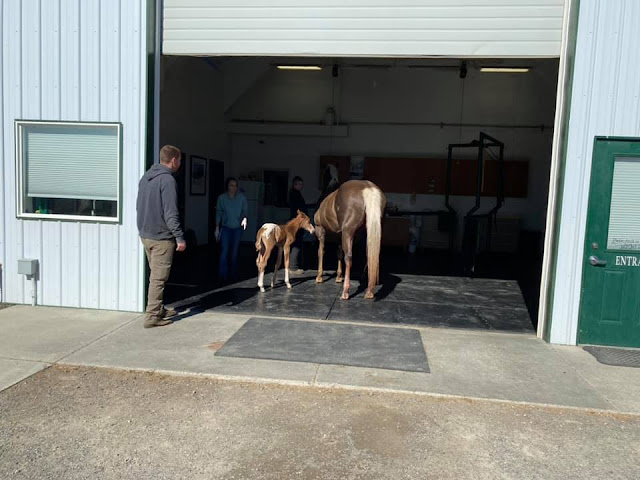 Getting mama and baby into a horse trailer, right after delivery, is not ideal. However, baby does like to follow mama, and being loose while mama was tied, it gave her access to more milk. She trailered like a champ.

I didn't go with them to the vet clinic because someone needed to stay at home with the puppy, but my husband drove with Shiloh and her husband going along.

They were able to reach into her uterus and suction out the placenta, then clean it out with saline water. From the stories they told me, it was extremely messy. The contents of the uterus--blood and muck--blew out all over the veterinarian. Shiloh came home firmly believing VETS ARE NOT PAID ENOUGH!

But they got it all out. 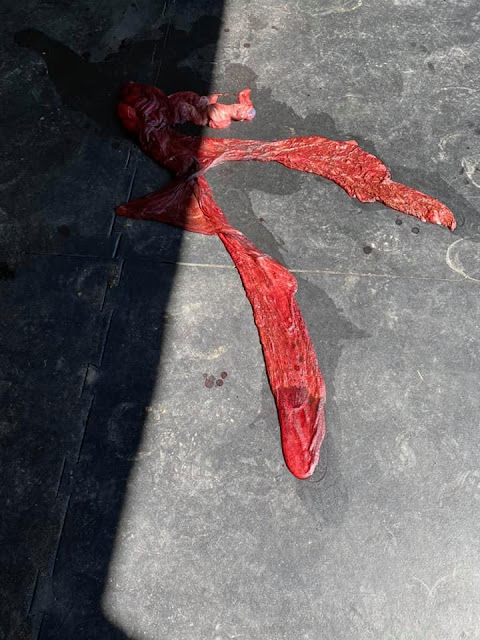 They administered oxytocin, banamine, and SMZ's, and sent us home to do the same in followup. We had to give Cowgirl shots of oxytocin every four hours until 1:45 am this morning, to make sure she expelled whatever was left, plus the water they'd introduced.

The foal check was a success. Epona, the name of the new filly, had already received enough colosutrum. Yay! She came home and got even more. Foals can only absorb colostrum for the first 24 hours, so this was our biggest concern. All of her vitals were good, and her body parts strong and healthy.

She slept through the checkup. 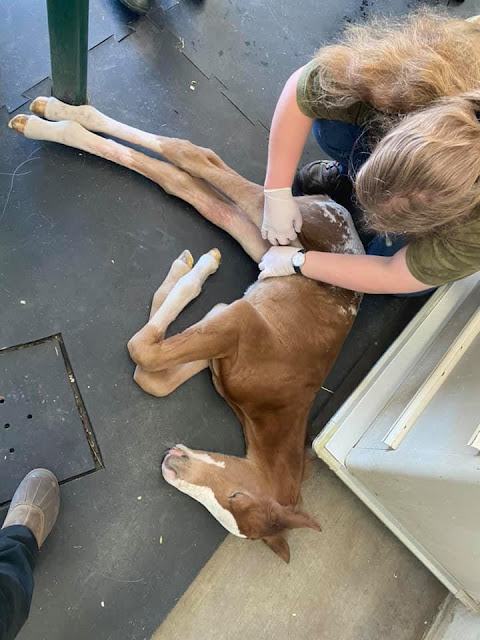 Epona was very tired yesterday afternoon, and she slept a lot. By night, however, she had recharged, and was learning to run her mama in circles.

I continue to be on high alert for any potential complications with mama and foal, and we're treating Epona's umbilicus 3 times per day with a chlorhexidine solution mixed with distilled water. We have sealed in their private turnout so that the wolfhounds can't get in and chase her around, and we continue to administer SMZ's to Cowgirl to guard against infection. I am on poop patrol, and as a side note--Cowgirl's massive manure production almost ended on the day she went into labor. Apparently, they clean themselves out ahead of delivery--so that's another sign baby is coming--and then it takes a while for new manure to be produced. I was getting very worried about her lack of production, but it is quite normal for them to poop less after they give birth.
I think Shiloh hit the lottery with this filly! She has color and chrome, and she loves people. She came to us as soon as she was on her feet, and again the next morning. She loves people, and is quite smart, calm, and gregarious.
The birth of a foal is a miraculous experience to witness. It's fraught with potential problems, and a bit nerve-wracking, but when it's going right, it's amazing.
Here are some parting photos of Epona's first day of life. 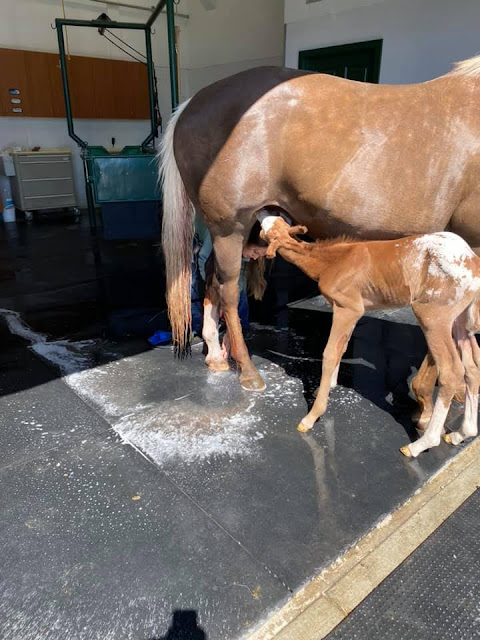 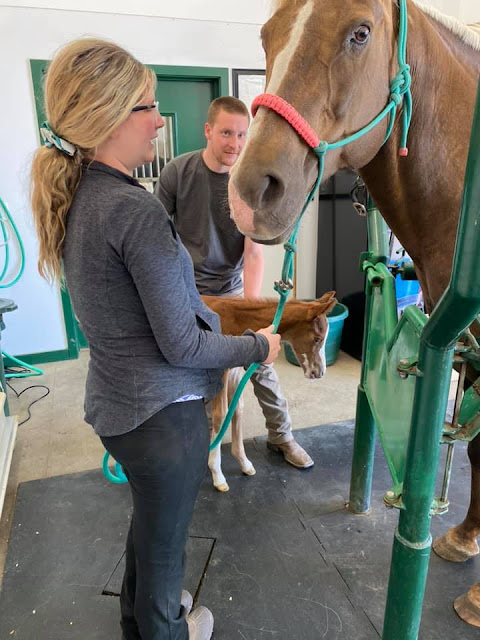 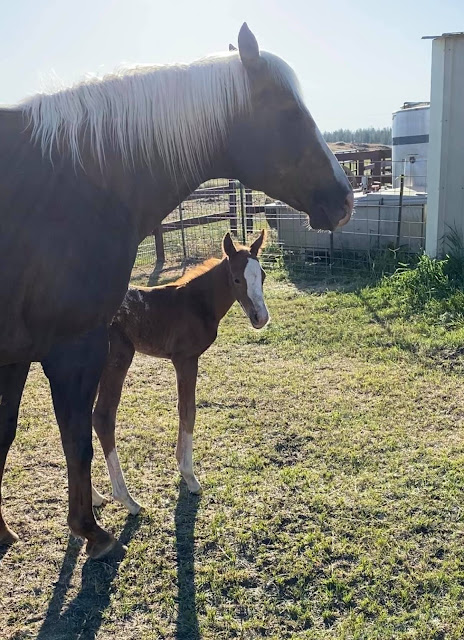 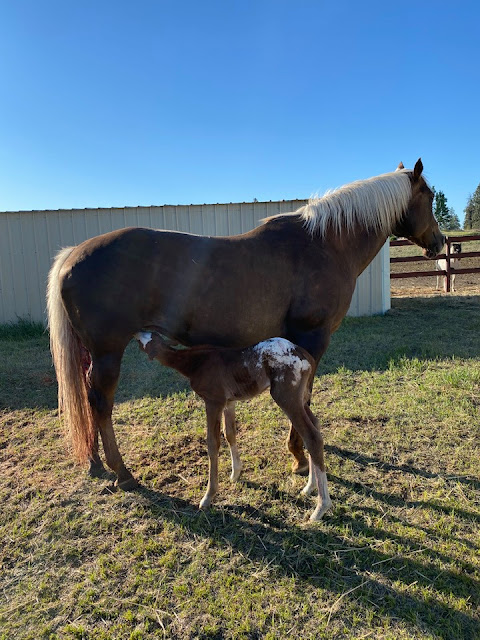 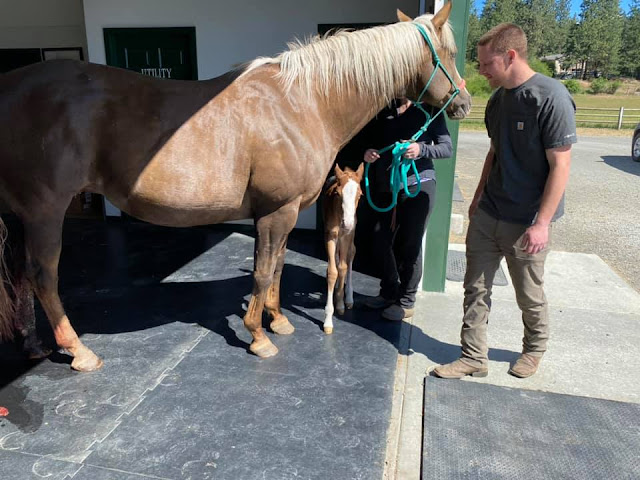 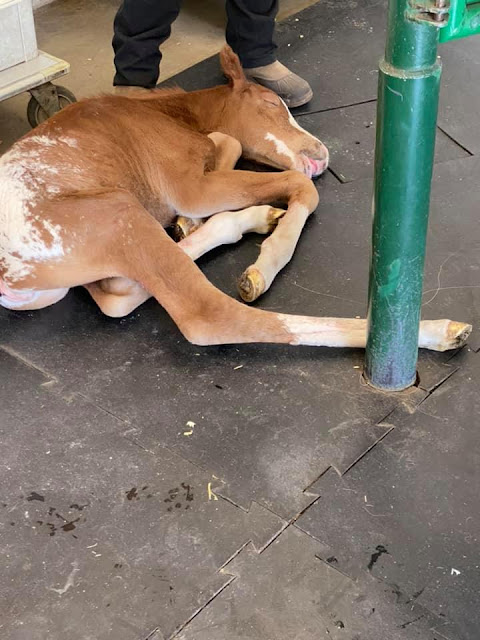 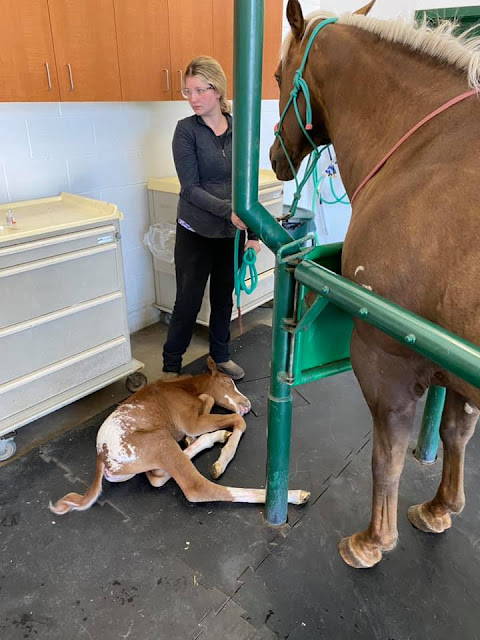 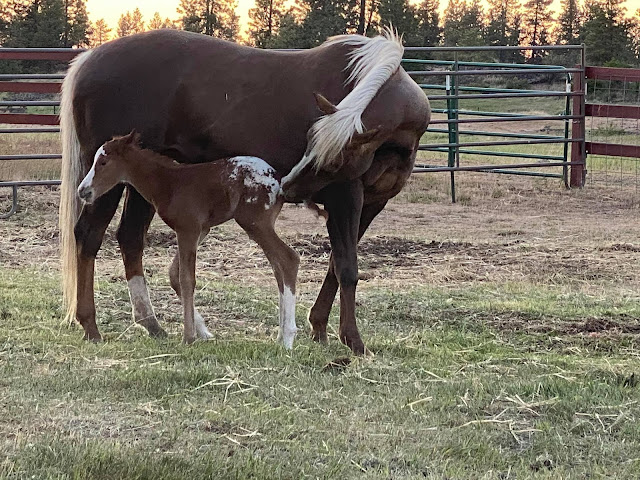