When Everything Becomes Yes

What a strange little word "yes" is.  So difficult.  So simple.

Yes-terday was the first day our state parks reopened, which meant my favorite place, the equestrian area and obstacle course, was also open.  I couldn't wait to take T'weed there, work further on unity--and test our unity.

I hauled three horses, with T'weed in the front of the trailer. By the time we had arrived, I could see that he had pawed the panel in front a bit.  It's well protected, but had visible hoof streaks. He was tense, but he was also manageable.  I want him to be ready to haul the two hours on June 1st--so, we will need as much practice as possible before then. 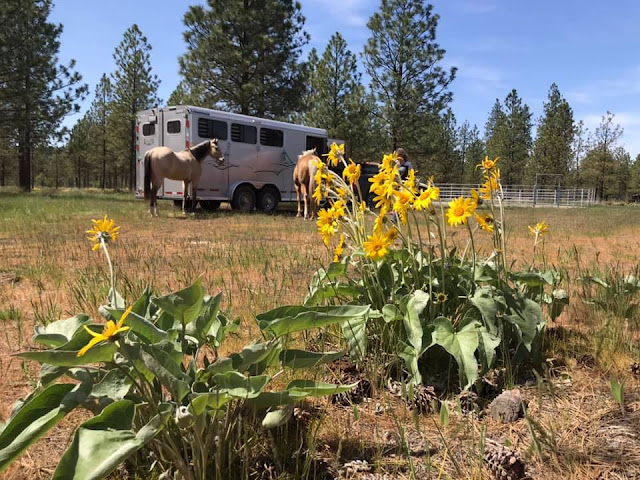 The balsamroot is everywhere at the park--everywhere.  It's interesting, because this is looking like a very dry year--we have murder hornets in our state--coronavirus spread started here--and we have an abundance of balsamroot.  It turns out, balsamroom was used to treat tuburculosis in the past--another disease that attacks the lungs. Coincidence?  Hmmmm...

"As a medicinal plant arrowleaf balsamroot helped relieve the pain of burns, wounds and bruises. The root was made into a tea and used to treat tuberculosis and whooping cough. The Cheyenne tribe steamed the entire plant and inhaled the vapors to cure stomach pain and headaches."

Turns out, he wasn't impressed with having it thrown on him--at liberty.  In fact, he showed me just what he thought of it--kicking up at it as he took off and ran away.

It went on like that for a while--too long. He wanted to come to me, but he didn't want anything to do with the pad over his back. I'd push him off, control his direction, ask him back in--try again. Nada. He was more than happy to sniff it--stomp on it--pull it off the rail and let it fall to the ground, but damned if he was going to let me throw it over.

At some point, I stopped what I was doing and asked myself what needed to be done to get to that point I wrote about in my last post--unity--cooperation--almost mind-reading. What did T'weed need to be successful and trust me?

My mind panned out to the bigger picture--an equestrian park--strange people, cars, other horses he'd never seen--trees, flowers--sounds.  Me.  Him. And I realized what was getting in between me and him was everything else.  It was too much stimulation, too fast, and the pad wasn't that important.  Comforting him, and being his partner through the new experience was very important.  Even essential.

I slowed everything down and stood by the gate and invited him over. He came right to me. I petted him all over and comforted him.  I talked to him about all the things he saw and heard--(not that he understands my talking, but he's used to me babbling away--so it was comforting.)

I put his lead rope back on -- a connection he's used to -- and we walked around the pen and looked out at all the stuff happening.  Then, we walked back over to the gate where I threw on his pad and secured it.  He didn't care at all.

I didn't get exactly what I had planned, but things change and we don't always get what we want. Turns out, just hauling there and experiencing so many new things was about all the pressure he wanted to handle at that point--and he needed me by him to help handle it.

From that little bit of giving up my agenda and really tuning into him--an abundance of "yes's" were produced.  An abundance!!

We went to the obstacle course and I asked him to walk through, then back through, the entire labyrinth.  He did it without getting very stressed--a real milestone for him, because he has been resistant backing in the past--even at home.  But he gave it his all and did awesome.

From there, we went to "the ladder," an obstacle he wouldn't even think about doing last year--but this year--he gave me a YES on the first ask.


Then, to the bridge--which he didn't like last year either---but in his YES frame of mine-- first try...

I praised and praised him.  He loves praise.  He loves getting along.

Next, I tied him up and let him watch Cowgirl and Shiloh ride in the arena. 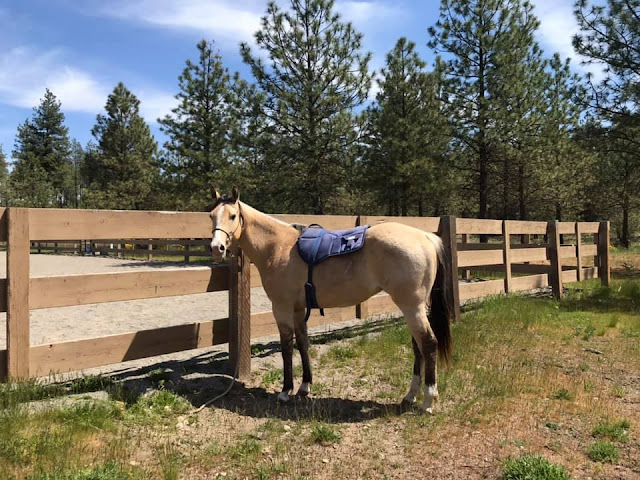 Then, I ponied him around the barrels off of Cowboy. (He wants to be Cowboy's boss--so there is some work that needs to be done to get him to respond to me and not Cowboy.) 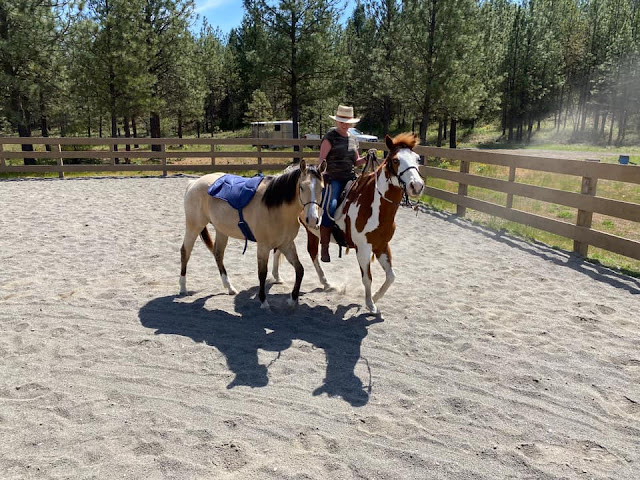 At the end of the day, I had him just rest and stand tied by Cowgirl, while we sat in chairs nearby. 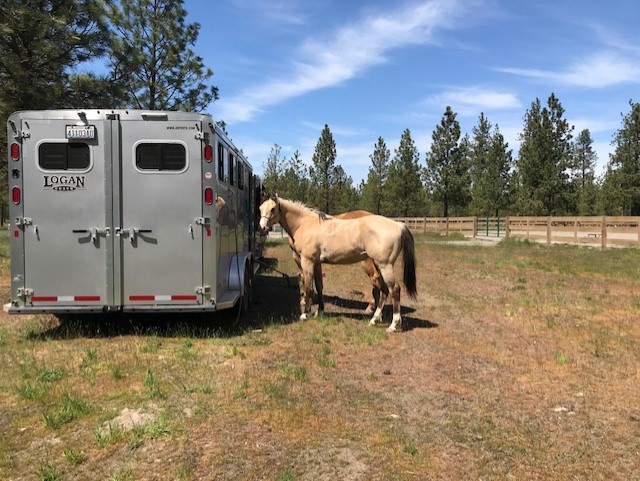 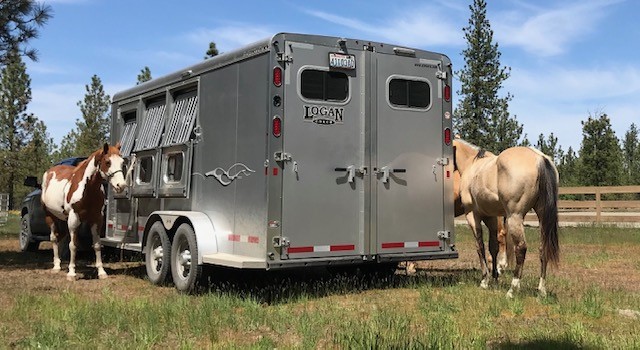 Finally, we called it a day and hauled home.

So you see, the path to unity is definitely an imperfect one -- full of mistakes, adjustments -- always salvageable -- always a path, if you keep looking, to the wonderful world of trust -- and a lot of yes answers.
Posted by Linda at 2:37 PM