Ugh, What an Awful Ride, Leah 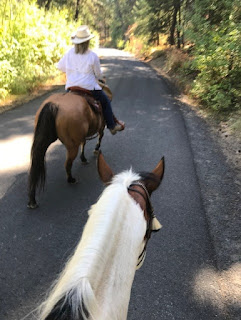 I haven't really shared any of my trail rides this summer because they've been, well, uneventful. I mostly ride good old Cowboy, and he's golden.  But for the last month I have sprinkled in rides with Leah, and they've been much more, well, energetic.

During our last ride, at James T Slavin Wildlife area, she wanted to rush back to the trailer.  I didn't hold it against her though, because all of her rides had been at the same park, and that was her first time back to Slavin in a year. I gave her the benefit of the doubt that there was, indeed, a moose in the trees. That was last week.

The good news--I was able to saddle her all by myself!  My back didn't give me any ouch signals.

The bad news--she was so hyped up over all the traffic we parked next to, she didn't pay attention to me and stepped square on my toes. It took a few moments to get her off of them, too.  And they hurt!  I could move the toes, so I figured they weren't broken, but it was an omen of things to come. (She was not partnering up! In fact, she was an ASS!)

After I saddled her, I worked with her in the parking lot--circles, disengaging, bending the neck, squaring up, mirroring my own walk, etc.  Then, we sat on a fence to let her rest and regroup, and her eyes seemed very relaxed--head down, tuned in.

But when I mounted, her head came back up and she was on the muscle.  I thought, do I call this ride off and trailer to a park she is more familiar with, or do I ride it out? The friend I was riding with was riding Foxy Mama, who was quite calm, and this friend was very familiar with the trails she was guiding us on today.  So, I opted to ride it out.

We crossed the road into the park, down some ravines, across another road, ...Leah was amped the whole way, and wanting to run.  I warned my friend that if it got any worse, I was going to dismount and take her back.  However, a steep ascent was coming up, and I wanted to see what happened after she was put to work.

Leah led the way, gawking around, not really looking where she put her feet--and it was rocky and steep--it was like she smelled something ahead.  A moose?  A cougar? Deer?

Sure enough, around the corner came two horses and riders--also amped up.  The trail was way too narrow to pass, so I dismounted and took her up the side of a steep hill.  That didn't work out very well for them to get by, so I backed her down and to a wider area.  One of their horses was a "green" gelding, and our two mares were really reacting to him.  They got passed us with a little drama, Foxy took the lead, I remounted, and off we went again.

Directly, we ran into hikers with dogs, bikers, and pretty much everything the trails could throw at us.  There were parts that were very rocky, steep, and had drop offs that descended hundreds of feet.  I dismounted and walked her past a few of those because I did not trust her in that state of mind, AND I'm afraid of heights!

Finally, we got off the mountain edge and to some switchbacks, which were also rocky and had sharp turns.  The horses had to really use their bodies and swing their hind ends around, while balancing themselves in front.

By the time Leah was done with a couple hours of that, she was, indeed, walking on a loose rein.  And I thought all was well....until we went through some overgrown trees and shrubs that flew back on us.  I was almost wiped off of her--and she bolted forward--but I had been anticipating her bolts and evasions the whole ride, and I was ready for her biggest bolt, too.  I was able to keep her from fleeing.

Her worst bolt was also her last bolt, which was good because we needed to traverse about a 1/2 mile on a paved bike trail where bikes will often fly by at high speeds to build up speed for the hills.  And, golden Foxy decided it was her turn to be bad with a little jigging on that trail.

It was one of those rides that was very good for Leah and I--she had to use her body in new ways and really think about where she put her feet--and I had to work on keeping her under saddle--and me in the saddle.

It was also one of those rides where you're happy to be back in one piece, having a picnic lunch stiff drink, and watch your horses relax and stand tied while you just go --- WHEW, it's good to be alive, AND I need to ride that bad girl more often! 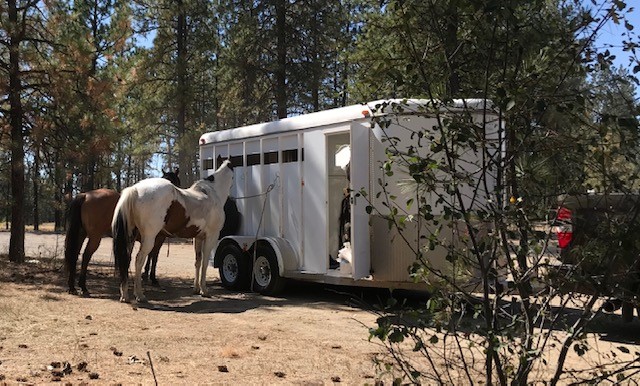