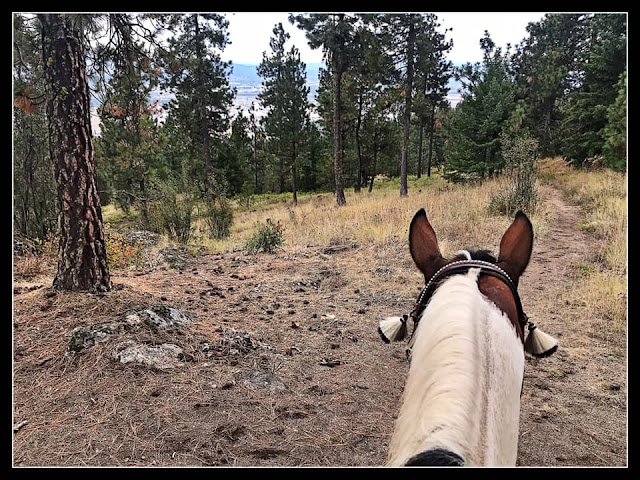 I wasn't about to get stuck on the freeway for want of a tire when I hauled last Tuesday.  These brand new tires gave me peace of mind. Unfortunately, they don't actually do the hauling for me--I have to Cowgirl Up--but they helped. 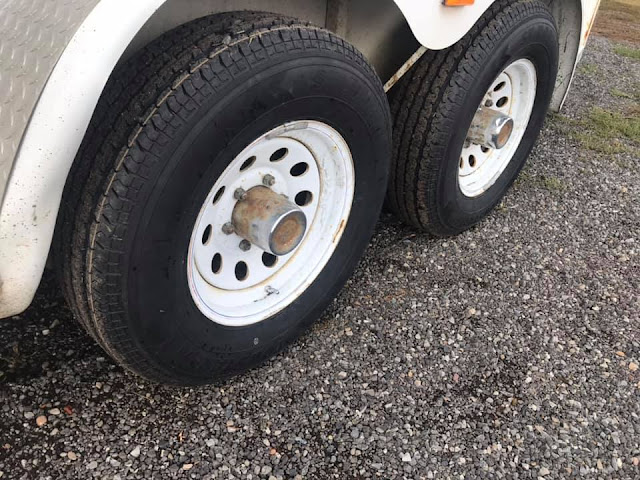 So, the fraidy cat drive update: The freeway was busy and Leah wasn't happy.  She made that clear, but she also arrived in one non-bleeding or broken piece both directions.  Yay!  I should qualify this "fraidy cat" thing a little bit.  I am not afraid at all to haul an empty trailer down the freeway--I  have done a fair share of hauling in my life, as you know.  It's the horses in the back and all the crazy drivers weaving in and out and passing us.  I'm afraid something will happen that will hurt my horses.  I'm nervous when I'm a passenger and someone else is driving, too. I drive the freeway a lot going west of here, and that doesn't bother me because I'm not going through the heart of the city.  It's the many exits and stops in a very busy corridor that stresses me out.  Spokane isn't the biggest city, but it sure is growing.

One little trick I do at stoplights, when she starts shifting and banging, is to slide forward a bit and brake hard. I always give myself enough distance between my truck and the other cars so that I can do that several times if I have to--depending on the light.  One of our last lights was delayed by a freaking TRAIN! Leah  hated the train, and she hated the wait--so I turned out of the lane and created a new way home--just to keep moving.  But the little trick does work better than nothing. When she feels the car moving, she quiets.

The ride was amazing at Antoine Peak!  It's basically a big mountain.  So, you ride straight up 800' and then down 800' in a loop.  The ride down was very steep and narrow, but Leah navigated it like a rock star.  I didn't know if she'd be able to handle that steep and long a descent.  I was impressed and relieved.

The top of the mountain. 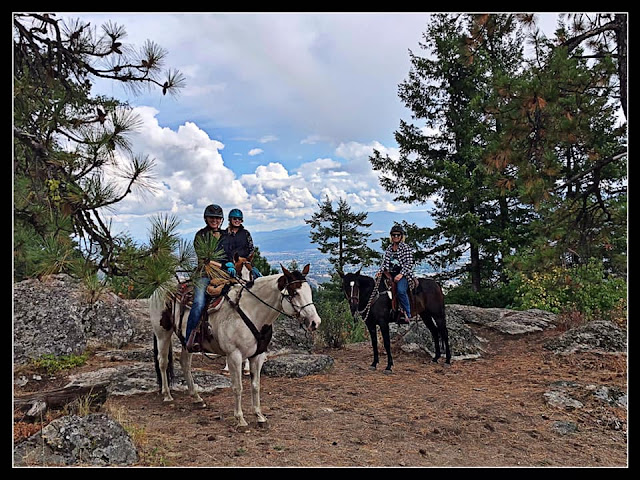 The view along the way. 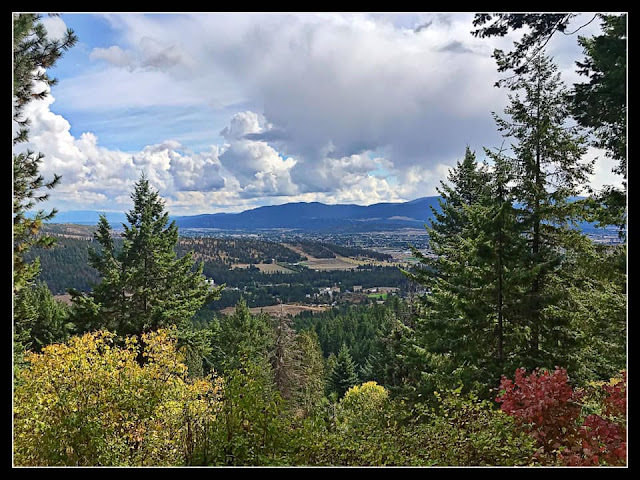 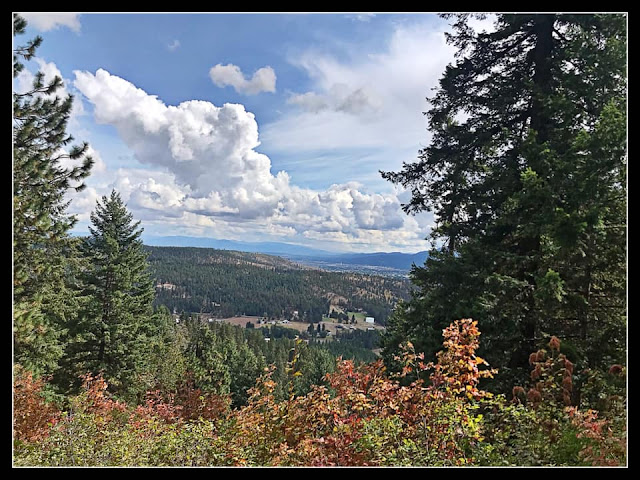 That ride lasted about three hours, and she worked up quite a sweat.

The next day, we rode an easier trail at Slavin Conservation Area. We didn't want to work the horses too hard.  It was about a three hour, mostly flat ride. 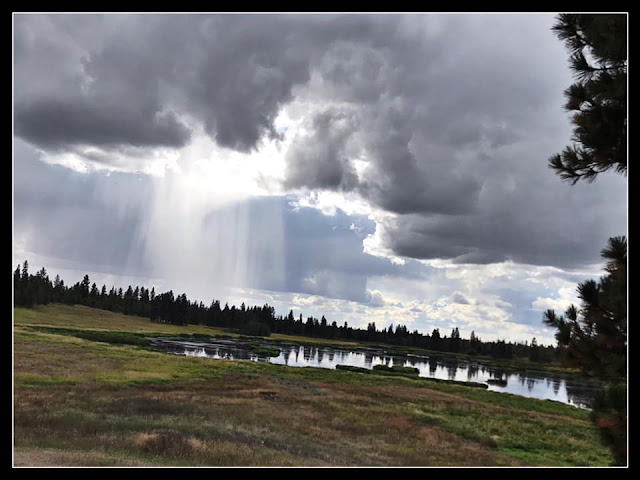 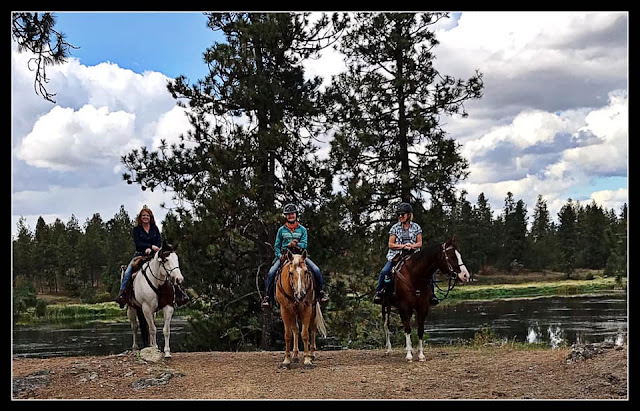 On the third day, we rode at Riverside State Park, which is much larger than I realized. I ride it a lot,  but not the area we were in.  My perspective of it was way off, and we ended up getting somewhat turned around.  When we finally found our way, three hours into it, Leah's front shoe came half off and we had to take the time to try to get it fully off. 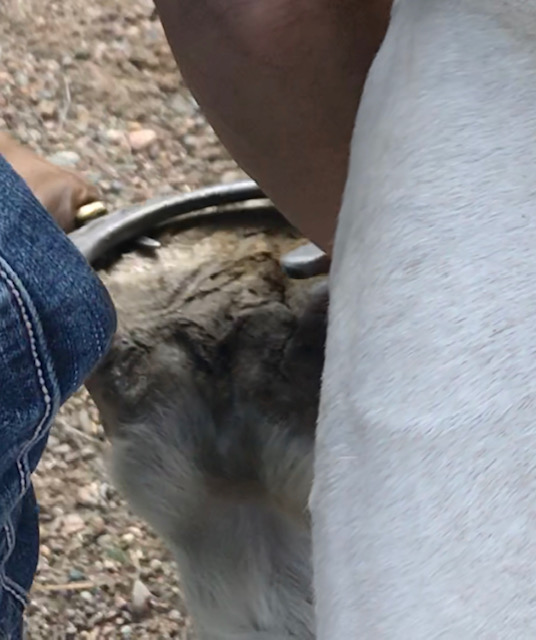 One broken knife blade later, a friend and I managed to loosen it up enough that she could easily walk it off without losing a big chunk of hoof.  She was one week away from new shoes, but I think all the tough rides and hard terrain plus hoof growth, were just too much for that shoe.  When my farrier came today he gave her a new set and was very happy with the way the shoe had come off.

Thankfully, she was able to pack me all the way back on just her one shoe, and she didn't even seem like she noticed.

So, now I'm taking a little break which, I'm sure, will make Miss Leah very happy!  She's out there grazing in her new shoes right now.

******
I have an appointment for the professional pictures coming up in two weeks.  I'll be giving it a lot of thought between now and then trying to come up with meaningful elements to include.  I will be taking photos with Tumbleweed and Leah, too.  And, my husband will join me with the dogs, as well.  It'll be a long one!

My Duluth trading Company order arrived (my puppy Piper got to it first and unbagged everything all over the yard! Thankfully, nothing was ripped!)  I was able to compare their small size to their medium.  Turns out, I was a small in this shirt, the Armachillo. 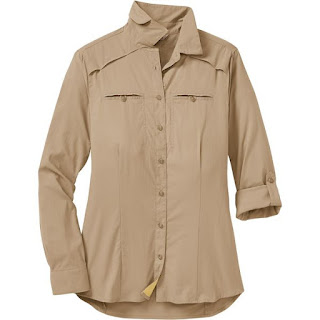 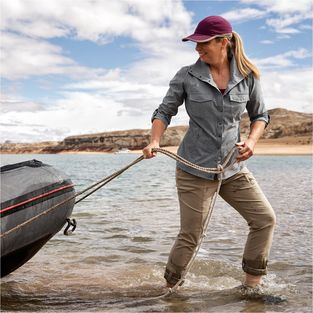 Therefore, I'm keeping both. It's such a cute shirt/jacket!  I wore it out to do barn chores today and it's thick enough to block the wind, but breathes enough to handle warmer temperatures and perspiration. It has the really cute collar, too.  And, LOTS of pockets--both inside and out.  It's a WORK shirt.  I'm impressed with Duluth quality!

Hope you're all doing well and enjoying end of summer adventures!
Posted by Linda at 1:23 PM