The Mustang Lesson that Turned Into A Yearling Lesson 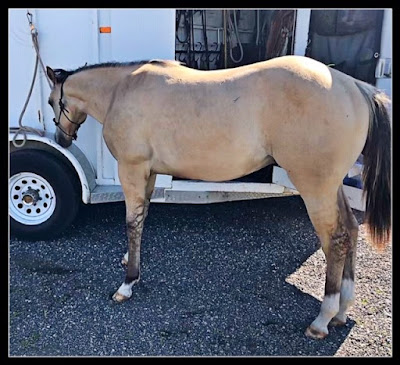 Once upon a time, there was a girl a woman a horsewoman, who had a mustang that was quite stoic, and a bit dangerous unpredictable, and she took the mustang her yearling Quarter Horse, to a lesson with a respected trainer.

I did not take Beautiful Girl to the lesson today, as planned.  Instead, when I went out to get her, Tumbleweed kept following me around, and I thought--this is the horse I will be riding someday soon, and he is the one to whom I should be concentrating my training.

Poor Tumbleweed was probably following me for his supplements, but he was loaded into the trailer instead--much to his dismay. 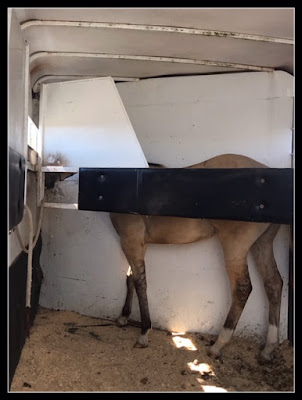 When we arrived at the barn, there were people and horses everywhere, and Tweed was making quite a ruckus whinnying.  I led him around the facility, down the breezeways, around the parking lot--and then to the lesson.

We worked on some interesting things.

1.) Moving his front end on the circle by keeping my crop/whip hand and my rope hand in the close together "riding " position.  He did not like that.  I  usually have my arms apart in the "hindquarter direction position", and he is used to that.  But once he understood, and respected, the front end movement--it became quick and quite beautiful.  She also had me concentrate the crop low, at the leg I wanted him to turn on, rather than keeping it high.  So, the arms are close together, in the "riding" position, and it is training him for the day he will actually be ridden.  It was very awkward for me, because I've never done it, but seeing how it changed him, I was quite surprised. And, he was not allowed to come in towards me for this turn.  He was supposed to pick up the front and turn it himself.  That requires balance, something he didn't have much of, at first, but that started to quickly come together for him. 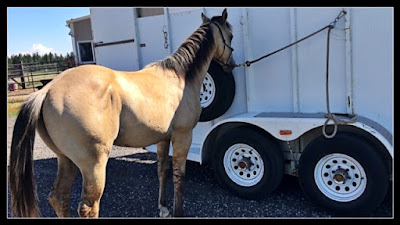 After that we, 2.) worked a little on the hind end turns where your arms are further apart, but your energy is significant toward the hind so that it snaps out during the turn rather than what we were doing--a meandering, slow turn.  She wanted him to spin around--and he did.  Again, it was beautiful to see the results, and easy to accomplish.  He didn't even break a sweat, but he calmed way down. When I'd ask him to turn his hindquarters and go the other direction--he was not allowed to come into my circle--it had to be done on his line of the outer circle.  Again, it required balance, and he had to rock back a bit on the hind end.  (I hope I'm describing this well because it is still coming together in my mind--and we'll be working on it at future lessons.)

We worked on doing that from a standing position, too.  When she takes one step toward them, she wants them to take two steps away from her.  When she does it from the side, to get them to move out, she wants them to move the feet she's going to ask for the turn.  This is all to keep him from turning into me when he moves out.  And again, it worked.  He tried to throw his shoulder in a couple of times, but received a quick reprimand.

Lastly, we worked on leading with the rope in the hand you'd lunge him on, and the whip on the inside--which sets you up to move them out in a circle should that be needed.  His nose was at my shoulder, and he was about 18" away.  If he slowed down, I used the crop to speed him up (remember the rearing a long time ago that I said was a version of stopping?  Well, now it's balking--or slowing down, which is, again, another version of stopping).  If he sped up in front of me, I backed him up with the crop.  We also practiced stopping a lot.

This is not the way I've usually led him.  If I'm on his left, the rope is in my left hand, the right hand is holding the crop, and the right hand is completely free of the rope.  I've always done it exact opposite.  The problem with my old way, is that if he speeds up and you have to ask him to move on a circle, you will have to change the rope and crop from hand to hand.

We did talk about Beautiful Girl, and she had some ideas about her.  She wants me to do these same lessons with Beautiful and tell her what happens.  They imitate riding, and how you would control the feet if you were in the saddle, and she suspects, she will have difficulty when I ask her for the front end turns with my hands close together.  I think she's right, and I can't wait to get out there and test it.