The Art of Doing A Little Something, but Mostly Nothing 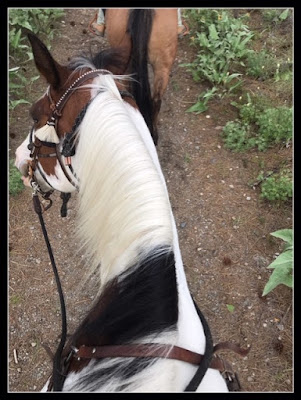 (Leah on the ride yesterday)

My daughter and I took Leah and Foxy to the state park arena yesterday for work and a ride.  Both Foxy and Leah were hyped up, and each struggled to stand still enough, or let us direct their feet enough, to open and close the gates without a lot of drama.  They were like, "Let's get this show on the road!"  So, we took our time--about two hours--working on very little steps--calming--relaxing--and moving again.  We did obstacles, and we continued to work with several separate gates--opening and closing.  When we'd gotten enough progress, we took a super short ride to end the day.

Today, I read over my past blog posts about Leah and realized--wow, I've been here before!  I have worked on this in the past, had success, and then reverted.  Now, here we are, kind of back to square one--with her trying to anticipate where to put her feet, building up anxiety wondering what I'm going to ask, and getting frustrated being asked to go slow.

I'm going to share a few things I've heard and seen in the past that I think relate to the type of training I'm moving toward:

Exhibit 1: Trainer: "I'd never ride a horse that couldn't cock a leg and relax while standing tied."

Exhibit 2: My old farrier buys my problem horse from me (one of the few horses I've ever sold) after bonding with her while she was in training with his wife.  At the time we were all boarding horses together, and I would go there every day and see him just sitting on "Flash".  He'd be there almost all day, watching his wife, helping her out--and sitting on Flash.  Oh, he did a little work here and there, and even taught her tricks, like dropping his steer rope and asking her to pick it up for him.  She'd reach down, pick it up, and hand it over to him.  And, he team roped on her and made her one of the best heeling horses of the group.  But mostly, he just hung out on her.

Exhibit 3:  A friend of mine used to spend his summers working on ranches, and they'd tell them to go pick out a horse--mostly green ones--and "buck them out".  He said that meant they'd just ride them until they stopped bucking and then take off.  That would be their horse for the summer.  They'd spend most of the day in the saddle moving cows around, but a lot of time just sitting there watching other people doing things--or talking.  The horses would turn out pretty solid, pretty quick.

Which leads me to this hypothesis:

There is an art to horse training that can be summed up as doing a little something, but MOSTLY nothing, which fosters more relaxed horses.

As to Exhibit 1, as I've racked my brain wondering how Beautiful can be so good on the ground for me, yet have those two blowups that appeared to come from nowhere--one thing stood out--she never was fully able to stand tied and cock a leg.  I mean it happened a couple of times--in her WHOLE life, but it was definitely not a habit.

So, today--I set up shop in the my Cowgirl Cave, and let her stand tied for two hours.  Hey, I have nothing but time nowadays. 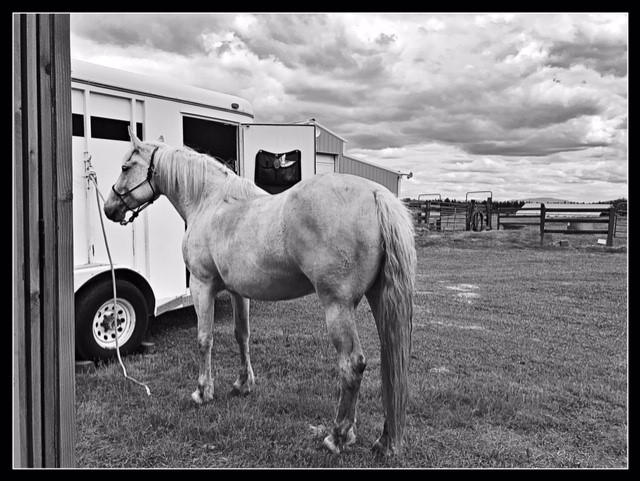 She didn't like it, but I wasn't asking her to do ANYTHING.  I was allowing her to chill and relax--it was her choice whether or not she would.  There will be a lot more of this in her future. I had my husband add a bunch of tie rings around the property so she can have a variety of locations to practice.

Time used to be in short commodity in my life, and when I went out to work with the horses, I needed to get things accomplished--or so I thought.  But that has flipped--and now, I have time.  I don't like riding a horse who is all excited and--what do I do, what do I do--gotta move, gotta move.  I want, and need her relaxation.

Guess what I did with Leah today? 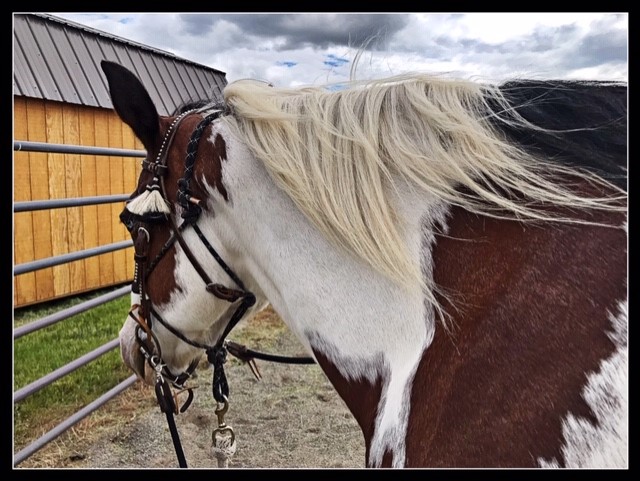 I picked up her rein at odd times--not asking her to move--but just so that she knows I can pick up the rein and she can still wait for communication of an ask.

She shifted her legs here and there--cocking them each in relaxation.  She was so relaxed, I made sure to warn her before I dismounted.

Such easy things to do, but they go such a long, long way and tell us a lot about what our horses are feeling.

In Tumbleweed news, I'm ponying him for ten minutes each day on Cowboy--in preparation of ponying on the trails.  He's a bit of a stinker with it.  He'll balk, and I have to put his rope over my horn and pull him forward.  He'll occasionally bite Cowboy, and I have to get after him, but he's learning.

He and I are also working on "facing" his fears.  I wrote before about how he'll bite and run--it's that turning away when he's being naughty.  Turns out, though, that he'll also turn away when he's THINKING about being naughty.  It's like he has a guilty conscience, and can't face me.  LOL.  So, facing me, or an obstacle, is vital for success--not just with him, but ALL the horses.

I don't know about you guys, but I'm kind of looking forward to doing a little something, but a lot of nothing in the future. All I have is time.