Taking the "Nothing" Show on the Road


Leah was getting into the new training technique--a little work, a lot of resting and waiting.  So, I figured it was time to test it out away from home.  Plus, Beautiful Girl needs exposure, too.  Win-Win.

I called my sweet daughter and asked if she wanted to accompany me (she has been riding with me at least twice a week this year) and on the way to the park, I filled her in on my new training "techniques."  She totally got it, and decided to do the same with Cowgirl, her horse.

Now, alongside my own search for answers, and unique path to get there, Jenna Blumer had mentioned Warwick Schiller.  Kind of sour about clinicians at this point in my life, because I tend to lose sight of my own / and my horse's paths when I stray out to "trainers," but one of his videos popped up on YouTube as I was uploading mine, and I couldn't resist taking a peek.  And,  yeah, he was right on to what I'm pursuing.

One of his videos mentions this exact thing I've been doing--but no techniques--just the philosophy, or idea, of being able to bring a horse's energy up AND back down.  It's the back down part that Leah is practicing in the video above and below.  I work her for short bursts, then park her somewhere new and ask her to rest.


The resting segments can be anywhere from 5 to 10 minutes, but not less.  I'm waiting for her to start shifting her weight around as she cocks a leg and takes a nap.  All of this is great for Beautiful Girl, who is practicing to stand tied away from her buddies.  So, she's getting a variety of scenarios as we change resting spots.

Leah did great except when we went to the obstacle course and rested pretty far from the trailer and buddies, but she eventually settled.  At first, though, she was getting pretty worked up, and I wondered if I'd be able to de-escalate the situation.  The worst spot for her was about 20 feet from the trailer, watching Cowgirl get untacked.  She about lost her sh#@ at that point.

The other idea Warwick Schiller talks about, that I have found with Beautiful Girl, is the "I'm Fine" idea--the "I'm Fine" horse.  Bascially, the horse who seems to be fine, but isn't trusting you enough to tell you they're not.  So, it's up to us to change that dynamic.  I'm trying!!  But Lord have mercy, she's good at hiding it.

While I was at the park, I witnessed two wrecks.  One was a guy who didn't know what he was doing, and he tried to mount his horse, the saddle slipped, he got dragged for a bit before his smart horse stopped, and he got free.  It happened in a split second, and ended with the same speed, but all our hearts dropped (I'd ran into some friends there--thus, the "our hearts.")

One of the friends I ran into was doing the tire obstacle with her horse--in saddle--and it got its hoof caught on the lip of the inside of the tire and fell.  She came off, thank God!!, but the horse fell in such a way that its legs were completely wrapped around the tire.  It was on its side with the saddle underneath it.  She is a pretty smart horse, so she was somewhat still, but they wanted to flip her.  I ran and got my lunge line, but suggested we try to get the saddle off her first, or at least uncinch it--I was worried that flipping over a hard saddle could hurt her back.  As we were trying to get her free from the saddle, she started to flail, and somehow was able to push herself away from the tire and back up. No injuries.  But I decided then and there NEVER to ride a horse over the tire obstacle.

Back to the nothing training.  People do look at you a bit weird when they see you just standing around with your horse.  So, there is an element of humility needed to accomplish this.

"Yep, hi there, I'm just doing nothing with my horse here, and calling it "training"!

Oddly enough, most of my friends completely get it. 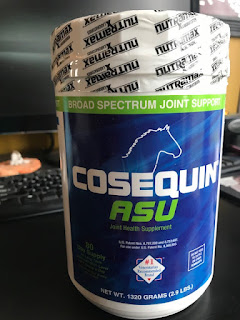 Cosequin ASU--just a parting thought.  I started Cowboy AND my irish wolfhounds on Cosequin ASU, and I think it is making a big difference. I am  no longer having to give Rimadyl to my 9 year old Wolfhound.  I give Leah the plain Cosequin, and it has also helped her.  But the ASU portion--Avocado, Soybean, is supposed to help regenerate, or at least slow the degeneration, of cartilage. I don't like paying $150/tub, so I'd like to say it doesn't work, but I can't.  It truly seems to work.  (As does Probios, another supplement some people dismiss, but always turns Tumbleweed around when he has loose stool.)

So, that's just my experience with these products, for whatever that is worth.  I have a lot of oldies in my herd, and I take great joy in keeping them going.

The best advice ever for oldies--

"Keep riding, if possible. Moderate exercise helps keep joints healthy by stimulating the production of synovial fluid and by strengthening the muscles that help stabilize the joints. "We recommend light work as long as it is in the horse's comfort zone," says Brosnahan. "You don't want to work a horse to the point of lameness."
Posted by Linda at 8:39 AM