Training For the Lope

At first,
They may try to buck,
But give them the reins
And sit deep in the saddle.
Like everything in life,
No guarantees,
We’re all on the bottom peg,
Really,
When it comes to living,
Or dying,
Or even breaking a leg.
Loping a green horse
Isn’t much different
Than falling in love,
Or growing old.
We like to feel alive,
Sometimes,
We like to fly
On the back of a horse
Learning to run,
With chaos on her back. 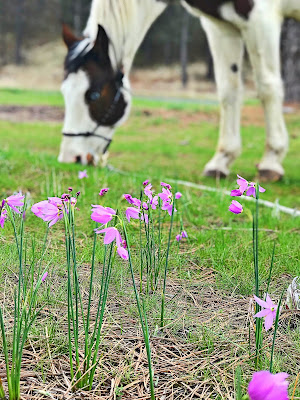 Leah and I have had such a breakthrough in our partnership this spring. We're together in ways I didn't think possible--which I attribute to the slow, patient work we did with the gate.  That waiting--no matter how long it took, and it did take a LONG time--for her to calm, opened up a new level of trust and communication. 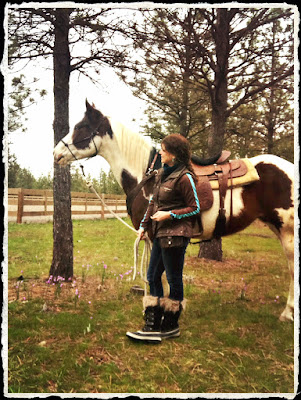 I rode with another friend last week who had last seen Leah in action a couple years ago--at her lowest point--and she was amazed at how different she was--both in looks and attitude.  She said she could barely recognize her and that she was going to make me a great trail horse.

And, in fact, Leah did shine in every way--on the obstacles, opening and closing various gates around the equestrian area, the collected trot, and trail work.

My goal with Leah this year is to get her in shape so that she can balance herself at a nice little lope. Easier said than done. Balance and hind end propulsion isn’t easy for her. She has to work hard to do what is difficult, but easier, for other horses. I’m working with my trainer because she has more experience and better balance than I do, and I want it to go the best it can.

You also can't discount muscle memory, just reminding her body how it feels to carry itself a certain way--and that she can do so and it will  make her job easier.  But again, having Rebecca to guide me through this--introducing certain exercises--only makes it all go that much better.

We started last Wednesday, and we used side reins to help Leah collect at the lope. The side reins are not very tight, allowing her to maintain her natural headset, and they have elastic. Still, Leah likes to hollow out and hold her head higher when she transitions, so she did feel the end of the give, which made her react /evade.  At the time, she was going right, and she evaded by bolting out of the circle--her favorite move.  My trainer stayed with her and brought her back into the circle. When they were done, she rode her and worked on the same things in saddle.

Going right is often the weakest side for horses, and she’s no different. 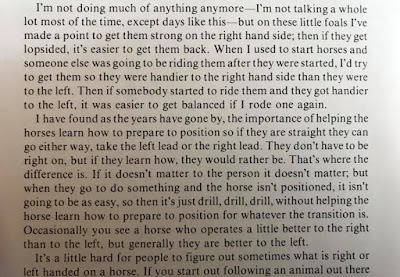 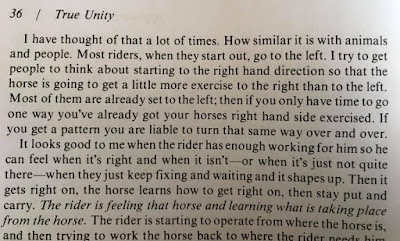 (Since reading that, I've been starting her to the right at the beginning of every training session.)

Rebecca suggested that I lope her only from the ground, every day, for one month, to get her in shape, and to vary the terrain where I lope her to work on paying attention to her feet.  (I found that she does much better in pasture than in the deep sand of the arena.  It's easier for her.)  Part 2 of the weekly plan is that Rebecca will come by and put a ride on her each week--working on the same concepts in saddle.

She cautioned that I stick to that plan, but....

I was working Leah at Riverside State Park, in their 60 foot round-pen, and she was doing so well that I thought I'd give it a try in saddle. Of course, no problem going to the left, but she did not want to lope going right, no matter how much I asked, and her extended trot was so rough it threw me off balance. I gave up and confessed to Rebecca that I'd jumped the gun. Lesson learned. I'll go back to the plan. (The good thing is that I did get the above poem out of the deal, and no harm was done to Leah--but it may be more difficult for Rebecca this week.)
Leah has lost weight and she is the healthiest she has been in a long time. Because of that weight loss, she's able to move better than she has in a long time, too. It's opening the door for many possibilities I didn't think we'd have.

Yesterday, we got a trail ride in with my husband, riding my heart horse Cowboy.  I wish I could be with all three of my heart horses at the same time, but this helps when I can bring one along for the ride. 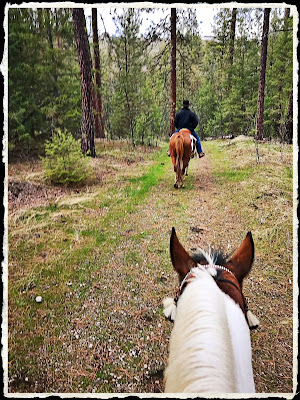 I'm so excited about the future!
Posted by Linda at 11:33 AM