A Tale of Two Winters: Back in the Saddle with Bee & Leah Neck Reins

February 2017, we had snow and ice and super cold temperatures.  The ground had been frozen since early that December and didn't thaw until March.  The snow had accumulated, so it melted all at the same time, but had no where to go with the ground being hard and previously saturated (from a wet October/November)  It caused flooding.  We lost Red on a cold February night, and a few weeks later our basement flooded--and stayed flooded for 3 weeks.

It was a bad year.

This photo is significant-- 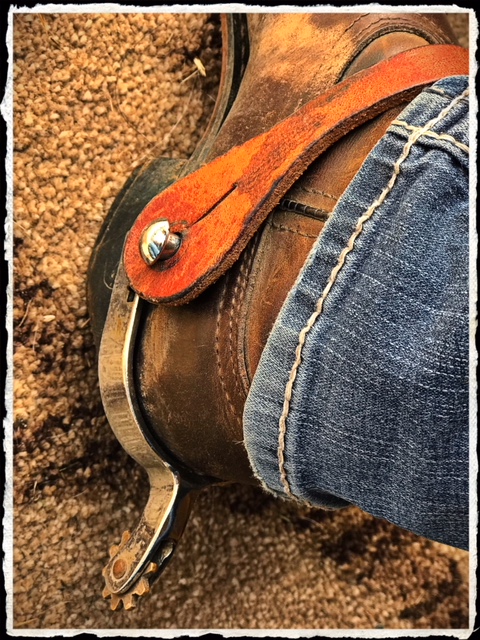 It was the first day I could retire my thick winter riding boots and don my cowboy boots.  And that meant--

I could ride Bee! 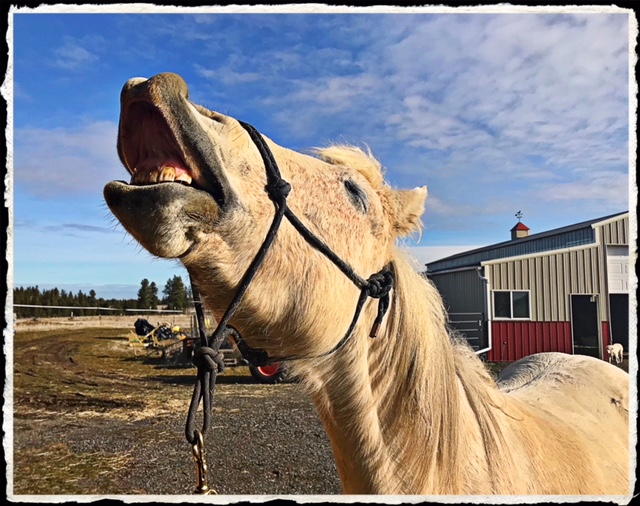 There was no way I was going to ride Bee in thick boots.  I didn't want to get hung up if anything went south. 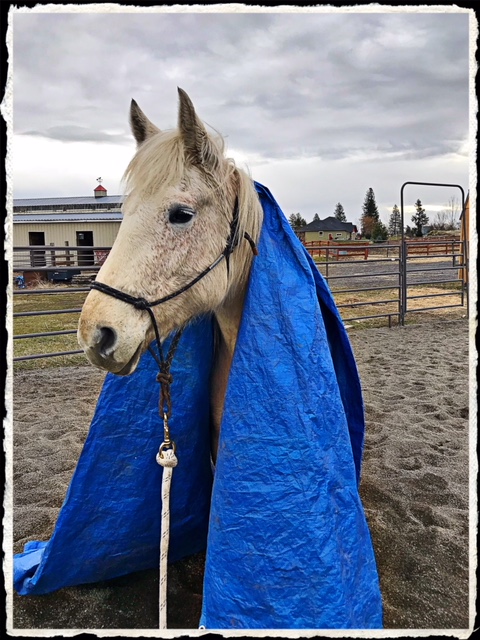 And today we did that, plus free lunging, driving over the tarp and other obstacles--and LAST--riding!  Something glorious happened--

she looked over at the other horses and saw Little Joe on Foxy--and she just did a little jump of surprise.

And I was happy, not that Little Joe was on Foxy, but I was happy that she spooked like a normal horse.  It wasn't anything I haven't handled a thousand times.  It was a nothing.  A blip.  But it broke the ice of my fear of  her spooking and doing something I couldn't handle.  I thought--Hey, I've got this!  She's just a normal ol' horse.  We had a normal ol' ride.  (Which is awesome since she hasn't been ridden for a couple of months!)

Then it was Leah's turn and --oh my--she's starting to move like a real horse!  It's like the feel is there between us and she's NECK REINING.

I'll back track a second...

to the approach.  Remember the last post, I decided her half turns in the stall weren't going to work anymore.  I mean, they were better than the days she'd walk out of her stall to her run to avoid me--which is why I tolerated them--but they were starting to feel like disrespect.

What I mean is this: I'd walk into her stall while she was at her feeder.  She'd walk away like she was going out to her run, but then she'd stop and half turn to me, but not fully turn to me.

I walked into the barn and she did this. 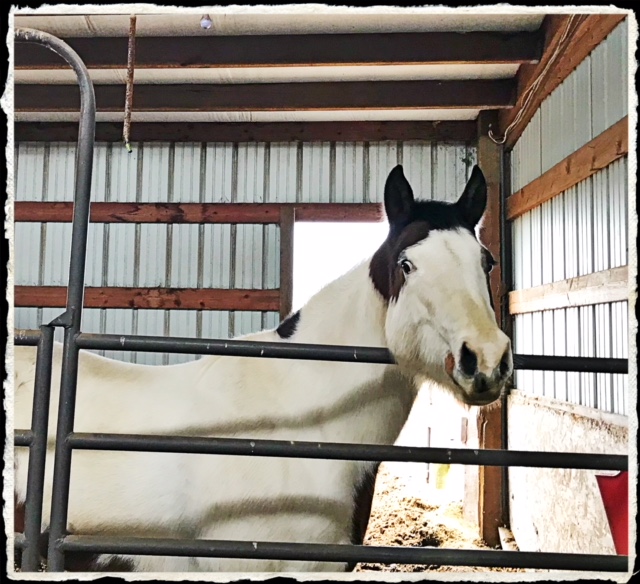 I walked into her stall and she did this.  (It would be funny to caption it--any ideas?) 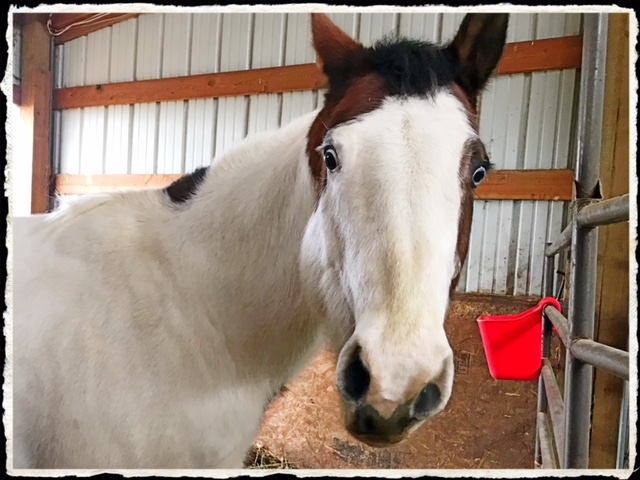 To test her, I held the lead up to her head to see if that would make her leave.  It didn't. 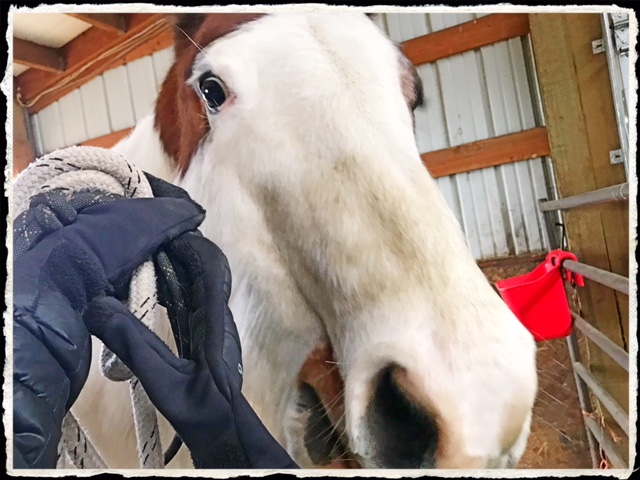 Today I went in and she was out in her run.  I called her to me.  She came.  That, my friends, is progress!

Below is us today--tacking up for a ride.  I was putting on my helmet in the the mirror--and there we were together--her head in the Cowgirl Cave.  I thought, I've got to a picture of this! And this.  One month ago, Leah's hay belly was so big, she was a tight fit on the very last notch of this back cinch.  Woohoo!  She's getting her girlish figure back! 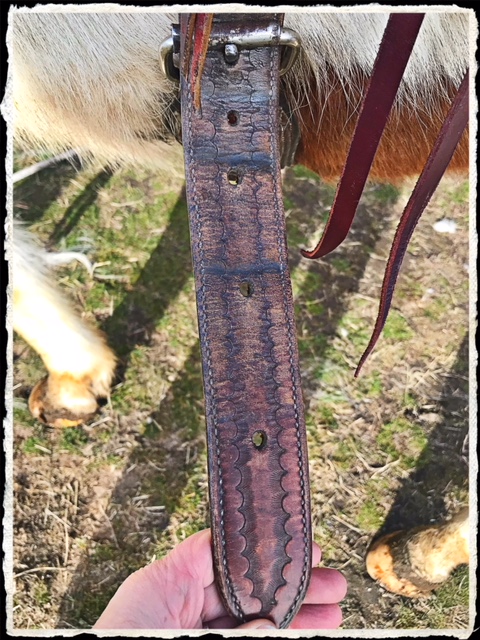 I free-lunged her again and her lope is just looking better and better and better.  Tomorrow I'll free lunge her with a tie down and start working on strengthening her back and getting her more collected.

Yesterday, we did the tarp over the back and head--then we walked over it.  (By the way, Bee had never had that training before, and she did perfect with EVERY. SINGLE. STEP.  It was weird.  She had no fear of the tarp--not on the ground, not on her back, not over her head.)  Leah, however, has done this before, and she still doesn't love the tarp, but she tolerated it. 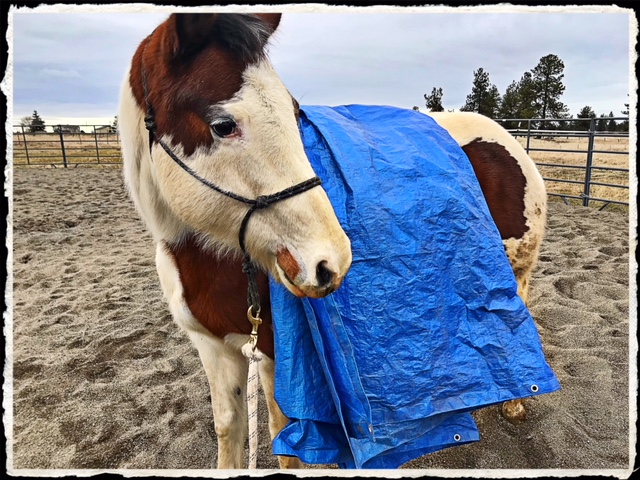 When we rode today, we walked over the tarp, and other obstacles, and continued to work on neck reining.

She likes the loose rein--it means less mouth/bit work.  The more I get off the bit, the more she feels like a real horse to me--whatever that means.  I think it means a horse that I'm used to riding.  She's calmer.  I feel more at home.

Being on a loose rein--with neck reining for turns--does provide her the opportunity to take off now and again--especially when we are turning toward the gate.  But it's easy enough to pick back up the rein and steer her around.  Little by little, she's giving up trying to escape.  She wants the freedom of a loose rein--a loose turn--and sit back in the back saddle with a verbal whoa.
Posted by Linda at 2:08 PM