Autumn is my favorite time of year, and I look forward to it each and every day after it passes.  I tell my husband not to plan ANY trips during the fall season because that is when our area is the absolute most beautiful.

Because of autumn, and its absolute grip on my heart, it has been a while since I've written on the blog, and I haven't been visiting my favorites as often as I'd like either. But it has been a busy and delightful time.

I've been able to get a couple rides out with Cowboy, a couple with Leah, and lots of work with Bee.  I even had my horse-crazy niece up for a weekend.  This coming weekend, I get to have my granddaughters, as our clinic season starts up again! 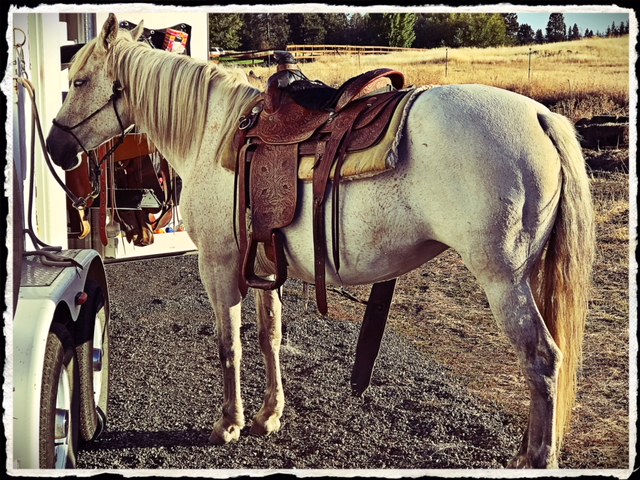 
Last I left off, I was getting ready to ride Bee in saddle. 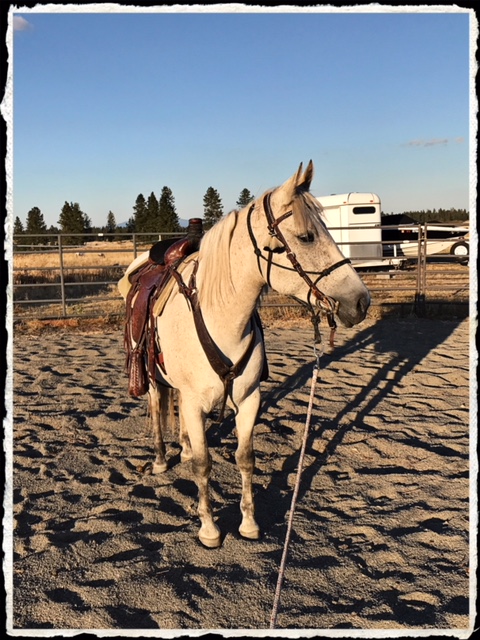 I started by working her on the ground. Lots of rope work--until I'd see her relax.  Then, practice carrying the saddle at all gaits.

She bucked  hard from trot to canter--just like she did the night she bucked my trainer off.  We had the snorting, all fours off the ground kind of bucking. Not for the faint of heart. When she quit, I was completely calm (after all, I wasn't on her back!).  She looked at me like, "What the heck just happened??"  I pointed for her to move on.  She did so quite willingly and didn't buck again.

But she did avoid going from trot to canter for a long time and several sessions.  Yesterday, she was full of energy, and I got her to do the transition several times with only a little bucking and/or kick out at the transition or when she'd slip.  The bigger issue yesterday was speed.  Cantering in saddle makes her nervous, and nervous makes her faster. 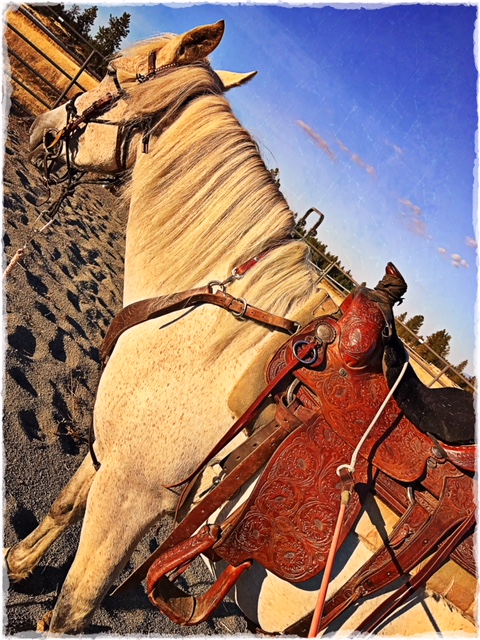 After seeing the first buck at transition, two weeks ago, I realized the bucking was not being mean or feisty or resistant.  It was just not understanding the feeling of that saddle on her back and it scaring  her.  It is hard work for a horse to hold themselves up at the canter/lope in a circle--and when you throw in a saddle, it makes it even harder.  But it gave me the information I needed to realize she needs lots of work carrying that saddle before carrying a rider.

However, that didn't stop me from riding her two weeks ago after her bucking session on the line. My plan was to keep it all at the walk and avoid transitions.  We also practiced lots of mounting and dismounting from the ground.  I had interesting things set up around the arena for her to walk to and inspect.  But I found her feet to be quite sticky and myself unwilling to do what was needed to unstick them.

I called Rebecca and asked for a ground driving lesson.  If I'm going to make her go, and work on steering, until she has it down pat, I'd prefer to do it from the ground and avoid fights.  If there's a fight, she will win.  The only way we'll both win is if it's a partnership. 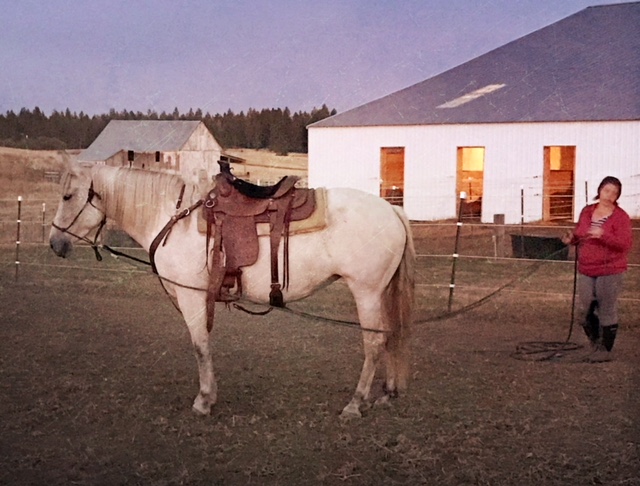 We used a halter to keep it safe until she understands all of this very well--then we'll move to a bit and bridle.  After Rebecca was done demonstrating, I took the reins.  I practiced alone here yesterday and it was fun.  Tough to get the feel for it with those long reins, but overall it went very, very well.  If something does go wrong, and she gets wound up or steps on a rein, the halter is very forgiving.

To sum up with Bee--my goal is to have her going so well on the ground, in saddle, that it takes those worries away from her when it's time to ride.  I want balancing the rider, interpreting rider cues, being away from her herd--to be the only stresses. And, those will be enough.  By practicing versions of all three of those things, in small increments, I hope to minimize them.

Leah has been a blast to ride.  Her body has come together.  She loves the fall trails. She's full of energy and she's strong.  But with her strength, and new found agility, she has also started taking more and more advantage of that big left shoulder escape route when we come to parts of the trail she'd rather not partake in--like steep descents or water crossings not previously practiced, so not in her imaginary "contract." 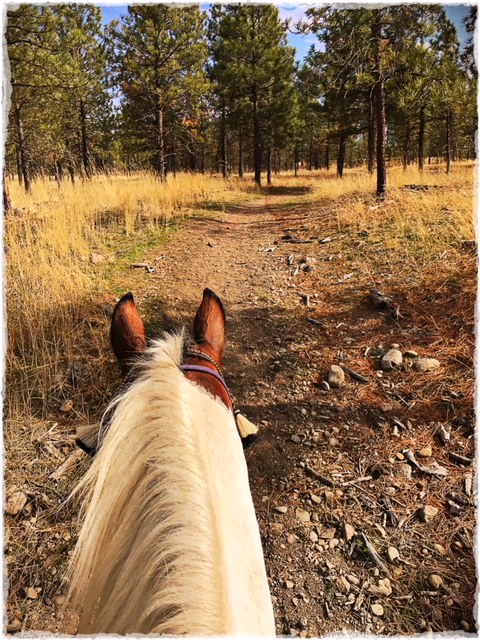 I had to UNretire my spurs. 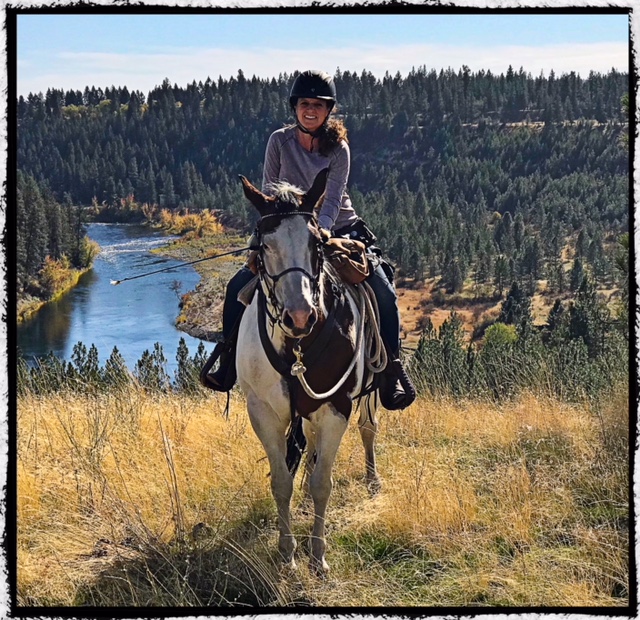 (She was a bit mad at having to back up and take this picture.  We'd already had two fights at junctures she didn't want to go down. After this last unhappy moment, however, the rest of the trail was fun for her and her demeanor brightened up.)

When I say spurs, I mean gentle ones.  Mine are turned down a little bit and have a wheel on the end.  I first ask with my body, then my leg, then a gentle, gentle nudge of the spur.

She gets it.  I should say, so far, so good.  In the photo above, you can see my crop--that was the ride I learned she wasn't to concerned about the crop.  The next trail ride, a few days later (no photos) I buckled on my spurs and only had to use them gently twice--and got a much better result.

The crop is awkward.  All the shifting it from hand to hand, dropping it here and there and having to dismount to pick it up.  If the spurs continue to work, I'm all in on spurs again.  The last time I used them was with Cowboy, back when he was 8 and also doing some BIG evasions.  They worked very well, and I never rode without them until I retired them about four years ago.  They're back.

Besides time with horses--we've been taking trips to Greenbluff with the family--and hey, we found more horses.  This was a wagon ride we all went on together. 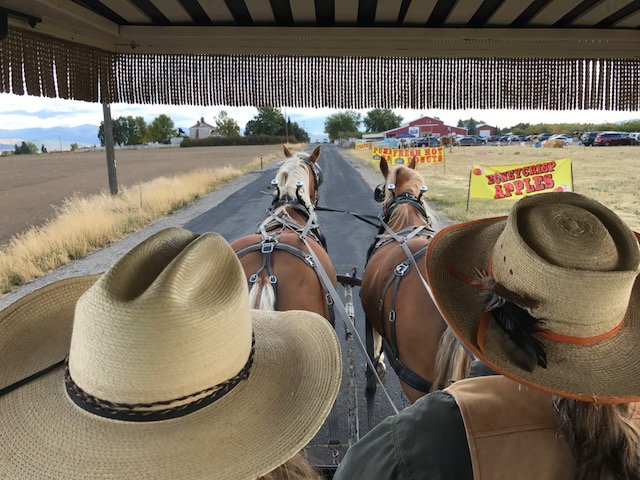 You can see the wagon behind--and the driver photobombing us. 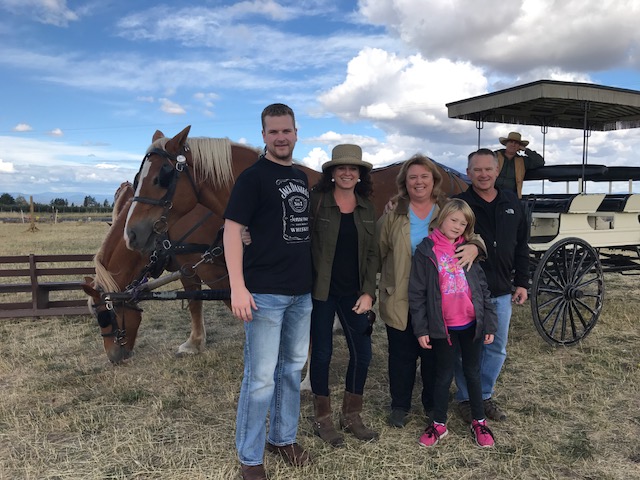 The following weekend, I took more of my kids to Greenbluff, but did the wine, hard cider, and brewery tastings.  The big kid version of the trip. 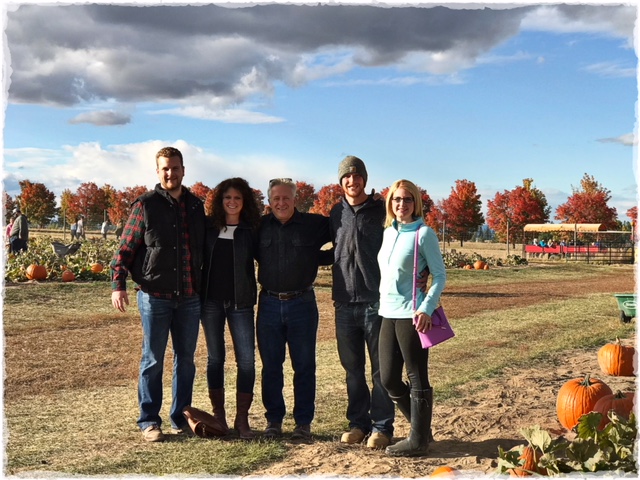 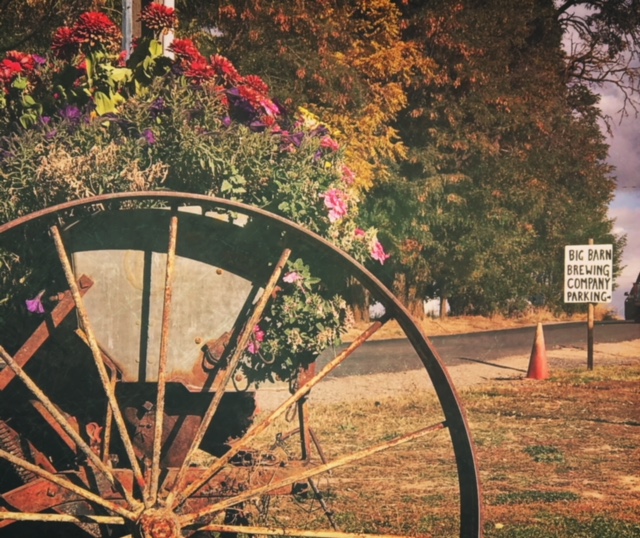 It has been a wonderful autumn, and there is only more and more to come!  A clinic tonight (remember those fun clinics of developing trust all last winter--it's those again. Yay!) and Saturday, and hopefully lots and lots of trail rides before the snow falls!

Happy autumn everyone and HAPPY TRAILS!
Posted by Linda at 9:51 AM