My First Ride on Beautiful Girl, Trail Training on Steep, Scary Trails, & a Trip to the Hospital

Be careful what you wish for.  Last Tuesday, I wrote, "Live like you're going to die.
Because we are."  The very next day, I was in the Urgent Care, having my heart stopped, loaded into an ambulance, and off to the ER.

I had my 6th episode of tachycardia, but they couldn't get it under control by normal means. My heart was pounding out a pretty steady 215 bpm for about an hour and half, so they decided to stop it and let it reset itself.

Before they did that, they were able to catch it on the ECG (EKG), and saw that I a have an extra node.  It's called Atrioventricular nodal reentrant tachycardia or AVNRT.  Here is a description:

I saw the cardiologist on Friday, and he recommended ablation surgery, where they go in and, basically, burn off the offending pathway(s). I went ahead and scheduled it, I mean, who wants to have to go to Urgent Care and have an ambulance show up with paramedics (bless their hearts, they were sweet!) who stop your heart then send you to the Walking Dead Film Set  Emergency Room.

Now, I'm leaning away from it. I'd like to try least invasive first--removing ALL stimulants, lowering my stress through meditation, and taking a beta blocker.  What I have, supposedly, won't kill you, but the "cure" has its own set of risks: stroke, heart attack, permanent need for a pacemaker.  Also, many commenters said their offending pathway grew back after about a decade.

If you've had any experience with this, please share in the comments.  I'd love to hear it.

Would a Horse Fall Off a Cliff?

It [the deer] waited and leaped not
over the skinner's slack length of lead
but into the pack lines over Otto's back
to tangle and thrash and send the whole
entwined line of them down the slope of diminishing scree.

Elegy for Otto the Mule by Robert Wrigley (excerpt) 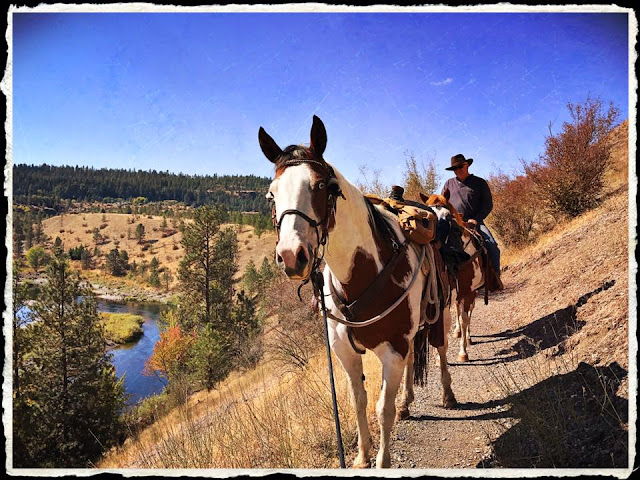 I'm not sure if it was that poem, or a few bad steps by Cowboy on a steep cliff trail, that got me wondering if a horse would actually step off a cliff.  Years ago, I asked my friend and trainer, who regularly rides the steep cliffs in search of cows that wander away from their herds, and her answer was absolutely, yes.  Every once in a while she had a green horse, who didn't pay attention to the trail, step off, lose its balance and careen down a draw.  None of them were ever seriously hurt, and she always jumped off before going down with them.

Yesterday, I didn't plan to confront all my fears, but there is something a night like Wednesday does to you in making your fears seem much smaller--or, at least, the way around them much more necessary AND clear.

I ride Leah at Riverside State Park a lot, but the one area of the park I have avoided is the steep descent to the river and the narrow switchback trail along the hillside. (pictured above).  I've ridden it a hundred times on Cowboy who, through much practice, has become a pro at traversing the steep trails.  Leah, on the other hand, has a bad habit of always looking up the hillside, as if she's looking for that deer to come thrashing out of the serviceberry or sagebrush.  That's all fine, IF she'd look at the trail, too.

At the worst part of the trail, I got off and walked her. (That's my safe way around).  She did, indeed, take bad steps off the trail--as I suspected she would--but she was able to stay upright without the weight of a rider to balance. I remounted where the hillside wasn't as steep.  All in all, it was a great, SAFE training experience. I hope to do it a few more times this year. 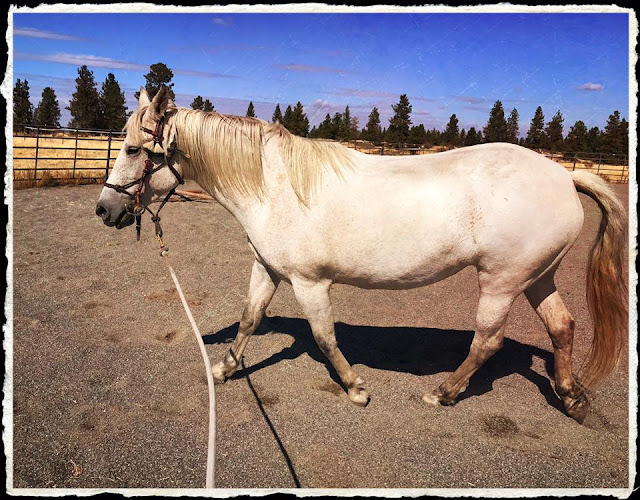 No surprise, after traversing the steep switchbacks, I was ready to tackle riding Bee.

I started the day with asking her to self-load into the trailer.  She will self-load her front feet, but not her back.  It's as if she's saying, I want to do what you're asking, but I don't want to give my consent to being fully loaded and hauled away.  Eventually, however, with a little patience, she did self-load fully by just being pointed in from her side.

The next step was ground work with the bridle and bit.  She's still in that chewy stage where she's thinking a lot about the bit and worrying about how to carry it.  My answer to that is lots of work while wearing it.

The first few steps were the scariest, but when we got to moving--all at the walk--I started to get a sense of her and what she's about.

3.  She doesn't feel the partnership when I'm on her back and out of her sight.

On the positive side:

1.  She's willing to take the chance.

3.  She's thinking it through.

4.  She gives me information, through her body, so I can avoid a fight.

This was the first time she had been ridden since her bucking incident.  At one point, her feet stopped, I asked for forward, and she started to back up instead.  I could feel her back tense.  I slid off her back, worked her from the ground, and remounted.  She went forward  nicely.

My plan is to continue riding her in small increments and fill in all those gaps above--purpose, softness, willingness, and trust.

I don't think getting off at sticky points will cause her to be more sticky IF I continue to stay calm and work her from the ground, and get back on.