For a Mustang, Boredom Training is Torture


"When a horse doesn't do what you tell him, you think you've lost.


It's not about winning or losing.
A horse doesn't even know what that means.
If something goes wrong, you start over.
You have to accept defeat to gain success." - Ray Hunt 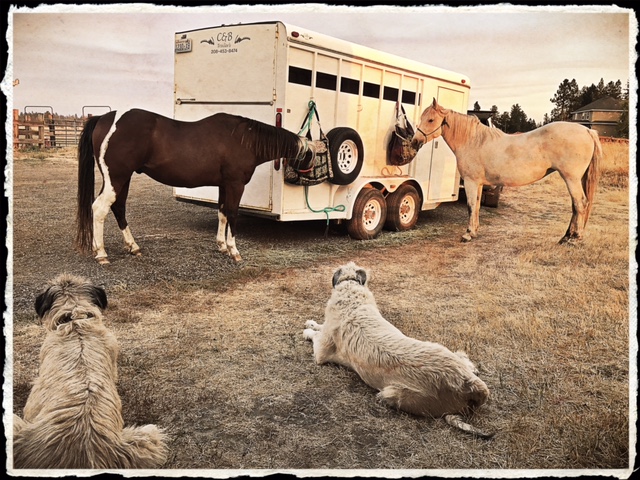 After the little bucking fit last week, Rebecca's post-analysis really stood out to me.  She said, "It was as if B got bored with going in circles and she just had enough." She said she could feel it coming on the previous ride and was expecting it that night.  So, it didn't really come out of nowhere.  Did a wasp land on her? Did Rebecca touching her butt right before it happened bother her?

Maybe.  But my mind went back to the times B is standing tied, hits a wall of boredom, and starts to pull back.

It hit me, whatever the catalyst, the problem with her being able to stand still and rest is a root issue that has to be addressed.

To plug that hole, I started boredom training the very next day, tying her to the trailer, by herself, in the a.m., as I cleaned the horse trailer.  And, then again that evening, with a buddy.  Her evening tying session lasted an hour and a half, as my husband and I sat in my Cowgirl Cave directly in back of them. 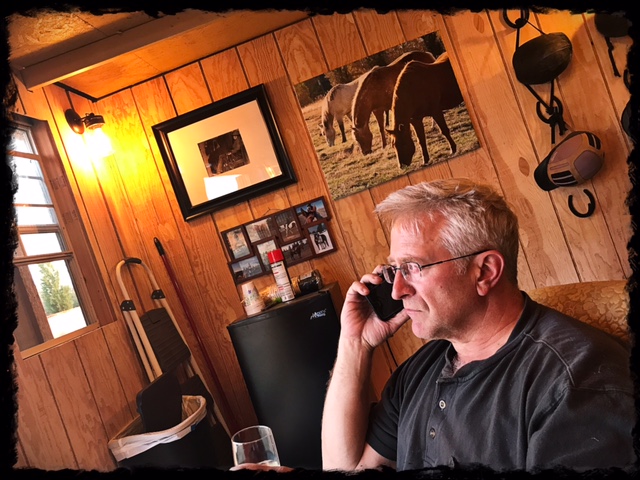 B did great--for an hour--then, she got bored and started pawing, threatening Little Joe, and not eating her hay.

I wrote Rebecca to tell her what I was doing, and she wrote back:

Good plan breaking her from being a herd horse. Being a broke horse will be hard for a bit for her.

If  Beautiful is any indication, it's tough for a Mustang to be bored.  They're always wanting to do.  Rebecca said she's rarely seen a Mustang that isn't the enforcer in the herd.  Beautiful is definitely our enforcer. 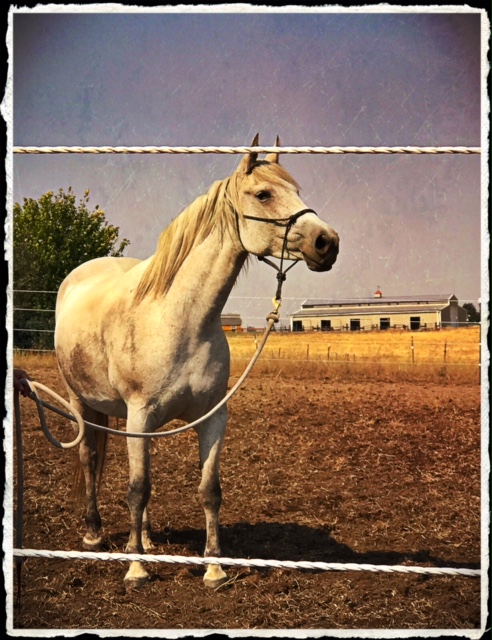 On day 2 of Boredom Training, or How to be a broke horse, or How to be a less herd bound horse...whatever  you want to call it, all the same, I loaded her in our trailer and hauled her two houses down to the barn. That is our barn in the background of the above photo.  Beautiful as not at all happy she could see her herd, but not get to them. 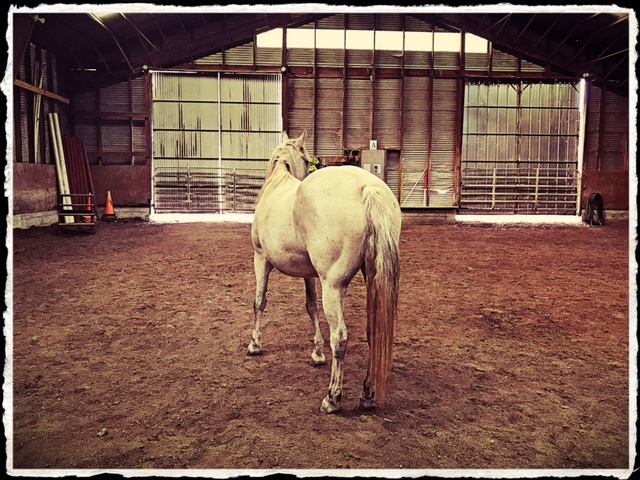 She did good in the trailer, loading and unloading.  She was on high alert, with all the new horses, and knowing hers were so close, but separated by fences.   Despite that, she did walk well on the lead and had no problem navigating the barn and aisle-ways to the indoor arena.

Inside, Rebecca told me to let her go.

At first, she was a sweet heart, checking out the scary periphery, then coming back to us, venturing further out, coming back, and on and on.

However, after she finally made it to the scariest things in the arena, and touched them, there was nothing more to stimulate her mind, and it was as if whatever happened during the bucking fit was happening again.

I basically said, "No, honey, you go entertain yourself for a while as we sit here and chat."

And, the wild rumpus began.  There was trotting, cantering, head tossing, pawing, an all out brat attack.  She was like a teenager playing heavy metal in their bedroom so that the parents have to hear their anger.  She knew she couldn't make me leave, but she was trying to send signals that she was very unhappy with my choices.

Rebecca threw her a bone.  She walked out and started to build obstacles for her.  Beautiful followed her around as she did this, as if she was so wishing she could use her hooves as hands and do the work for Rebecca. 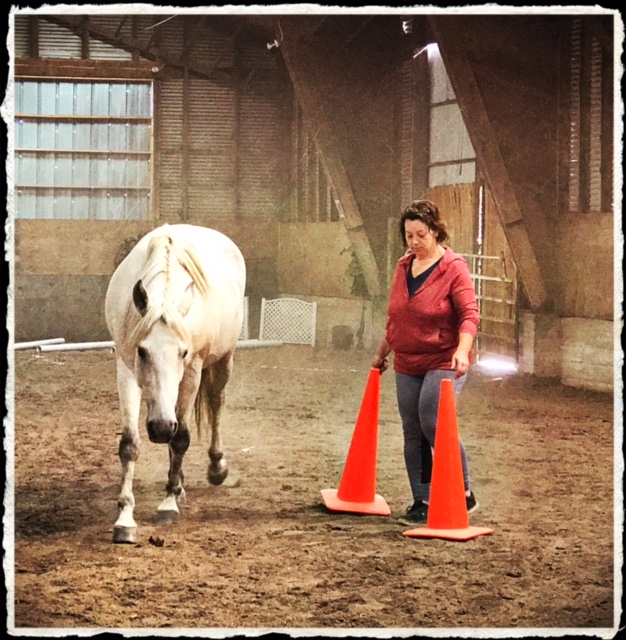 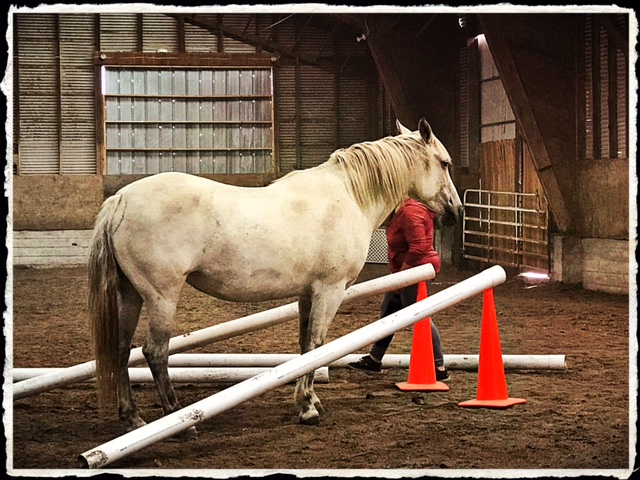 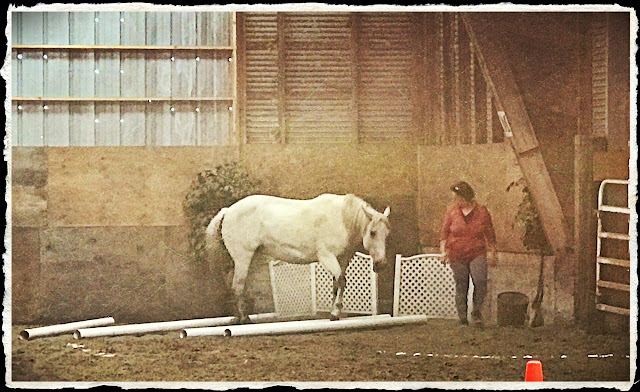 I can't say she every fully rested like we'd want to see, but there were moments of rest and they were rewarded by moving outside and walking around the property.

The work we're doing right now may seem small, boring (hopefully), and, to some, pointless--but I beg to differ.  Every horse is unique, and recognizing what each individual horse needs in order to progress, is always a good thing.

When we were done in the indoor, I went around scooping up B's mess--she followed at my elbow every step of the way--thinking, wanting to do it for me, trying to figure out a way that she could.  I love that about her.  I love that she's a thinking and doing horse--a horse who loves rules and knowing what the rules are--then enforcing them.

When her basic personality can be tempered with a little patience and trust in a new--human--herd, we will be well on the way to a wonderful trail partnership.
Posted by Linda at 11:44 AM