Sometimes, The Best Choice Is To Dismount 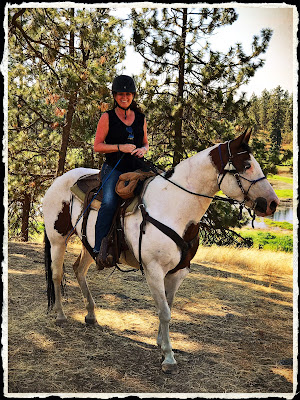 I don't think I mentioned my 99th day yet, so I'm going to backtrack and title this post: Sometimes, the Best Choice is To Dismount.  Because, ....well, you'll know soon enough.

My 99th Day was a wildlife preserve called James T Slavin.  It's a rather large wooded area with a giant marsh in the middle. The marsh attracts all kinds of wild birds--geese, ducks, swans--you name it.  The woods attract all kinds of wildlife--deer, coyote, and moose.  The grasses grow quite tall--often above the head of your horse, and things can fly out from underneath those grasses, or scurry across the path from the grasses--at any moment.

On our ride, we encountered two issues which tested Leah and myself.

The first was a very steep, narrow path with a large drop-off.  We tackled it first to get it out of the way. However, when we got to the steepest part, the trail splits off into two--one tough, but preferable path--and one tough, and non-preferable path.  Unfortunately, the preferable path had a log down over it--and there was no way to get past it.  The leader of our group of three continued to the non-preferable one, but her horse had other plans and decided to bale off the trail up a steep embankment at the top of the hill.  Leah was following behind him and instantly tried to push her left shoulder through my aids to follow him. I had a split second to decided what I'd do--and I did not think she could handle the embankment. Or, at the very least, there was a chance she would lose her balance--and that would mean certain injury for her--and possibly myself.  Not to mention, I had another rider behind me who is very cautious and is dealing with anxiety.

I dismounted as well as I could onto the embankment (there wasn't room for both horse and rider side side by side) and got in front of Leah.  Lucky for me, she is extremely calm when she can see me on the ground, and she instantly relaxed and followed to the top of the hill.  My friend following behind thanked me for dismounting.

From that point, we took the lead, as Leah isn't quite there with her following yet, and everything went very well.

The second thing that happened was Leah alerting to a large bull moose in the trees.  She saw it pretty early which gave us time to decide whether or not it would be wise to pass and risk getting charged.  We talked it over and opted to try passing around. It stayed in the trees watching us. 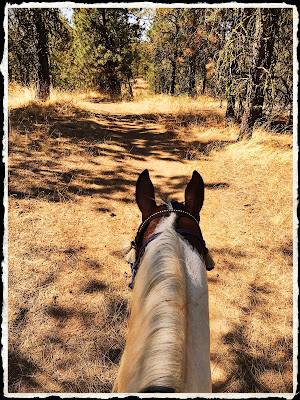 That was the second time Leah has been to Slavin, and I was very proud of her.  1. She stood still just long enough for me to dismount in a tight situation, and 2. She didn't turn and run when she saw the moose.  She alerted, I let her know I heard her by rubbing her neck and saying "okay", and then she did what I asked her to do--going past the moose.  I couldn't have asked for more.

So, last night was the first time since adopting Beautiful Girl that I trailered her away from home.  That's embarrassing, but true. For some reason, I have always been afraid of her getting hurt--and because of that--I've kept her from taking chances. 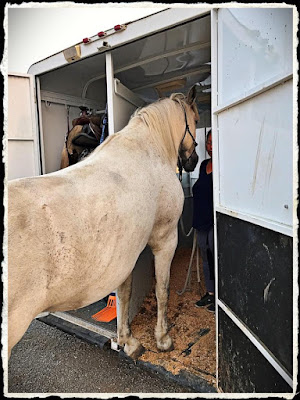 But that had to end.  She needs to step up to the plate, and she wants to step up--to the plate--and the trailer.  We hauled her ten minutes down the road to the state park, and she did very well standing in her place with the rail engaged. (I have a 3-horse slant load)

She was obviously scared because she was covered in sweat, but she was smart enough not to hurt herself.  She unloaded and we took her to the round pen where Rebecca began to work with her. 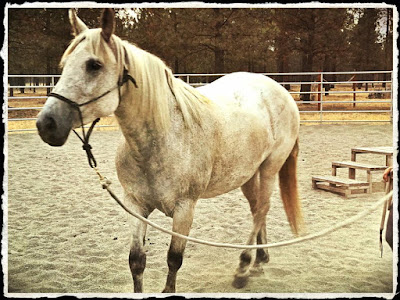 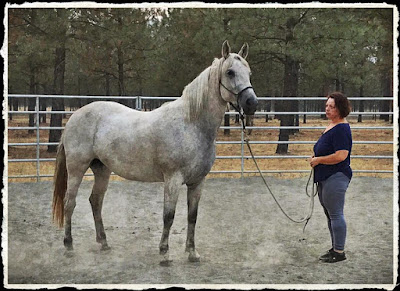 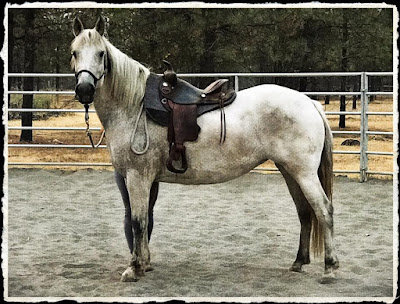 Everything was going pretty well, and she is a "green broke" horse, so Rebecca decided to ride her for a bit. 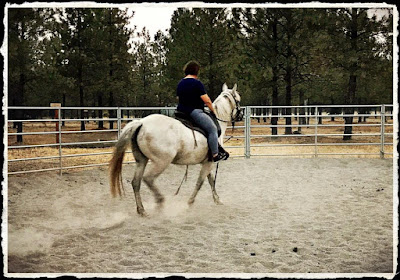 The ride was going so well, I stopped taping.  And, out of no where, Beautiful started bucking hard.  It was so out of the blue, we think it may have been a wasp since we saw wasps afterwards, but it was definitely a true bucking fit and not a kicking out, crow hop, etc.  She was very athletic and got a lot of air.

Rebecca lost a stirrup in the back and forth, but was able to get her head around and away from the rail where she could dismount.  It was a painful dismount, but it was on her terms and she was okay.

Beautiful seemed completely calm when she was done.  Rebecca walked over to her and mounted again.  They rode for about another five or ten minutes in perfect unity and perfection--walking, trotting, backing, and walking.

So, the theme of this week is that things can, and will, go wrong, horses are living and breathing partners--and that's why we love them.  It's sometimes a good idea to get off--on your terms--not as a reward for bad behavior, but as a preemptive measure, before things get worse.  The important thing is to keep calm and get back in the saddle.

After Leah's attempt to almost bolt--she was a great leader for the rest of the ride.  After Beautiful's strange bucking fit, she was an excellent partner to Rebecca.

And, today I went back out to work with Beautiful and see if she held any hard feelings.

She stood to be haltered and loaded right back into the trailer.  As far as I'm concerned, that's a sign that she's thinking, "Let's do this!"