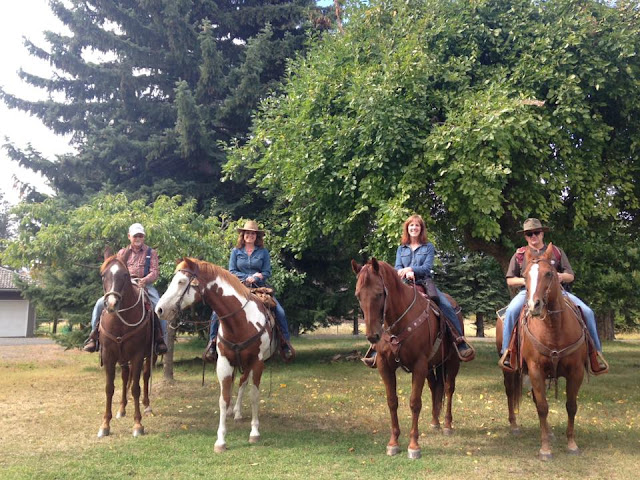 (Here we are before the ride.  Oh, what adventures awaited!)

This was a ride with my 87 year old friend--a retired family practice doc & lifelong equestrian who hails from the great state of Texas.  He can barely walk, but he can still ride!  And he likes the challenging stuff.

He'd stop us for a "meeting" at each juncture and say, Okay, we can go this way--the easy way--or this other way--through a walking tunnel, over the railroad tracks, along the railroad tracks, up some private property...etc."  He'd let us choose.  I usually opted for a smorgasbord of his ideas & nixed some of his others. 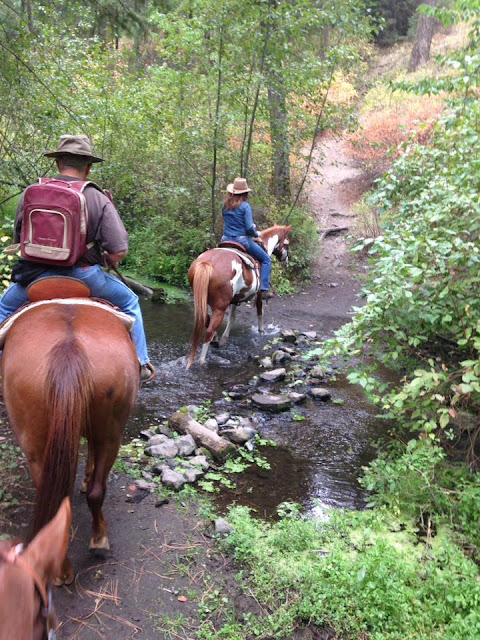 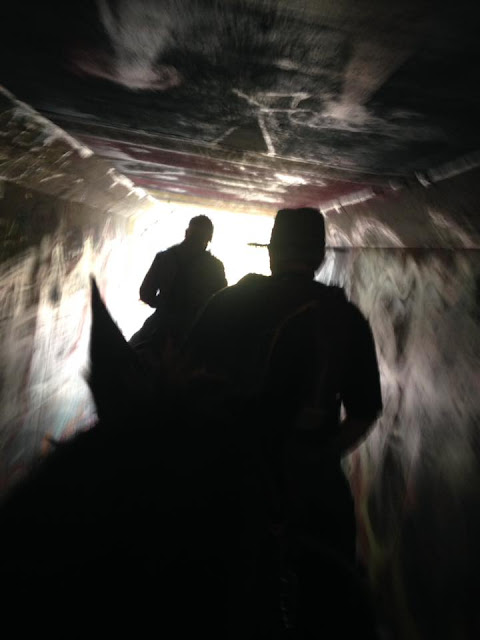 At one point in our adventure, my brave, seasoned gentleman rider almost got bucked off, and I have to admit his life did flash before my eyes--but it didn't seem to phase him. Not one bit. 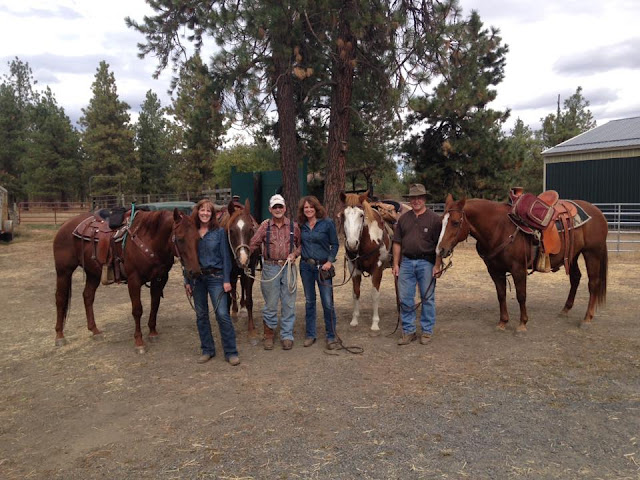 (Along the route we stopped at a friend's ranch. Things were still going well.)

The picture above is the last one I took--happier times--because when we left there-half way through our journey--things deteriorated for me.  And, they deteriorated for my bit.  Because, you see, my bit broke in half along a steep cliff trail.

Cowboy didn't act like anything had happened, but when I pulled up to slow him down, there was nothing there.  Nothing.  Just two  hanging pieces of broken bit and the bridle held on by a chin strap.

I got over the tree with no problem, and then I asked Cowboy to come over.  But Cowboy had other plans.  He wanted to go around the tree.  He was even willing to go over the cliff to get around the tree.  Although, in his defense, it was so overgrown with brush and shrubs, he probably didn't know it was a drop off.  As you can imagine, he figured it out quick when he started slipping and getting tangled up--and he jumped back on the trail to save his life--barely missing me.  I shouted a few not-so-savory-words during that little fiasco.  Not that it helped.

Off we went again, and I walked a good ways until we finally got off that Hell Trail and onto a wider one.  As you see, I'm writing this, so I made it back safely.  So did Cowboy.

In retrospect, I wonder what would have happened if the bit hadn't broken.  Would Cowboy still have avoided that tree and opted for the cliff?  Would my weight have got him off balance when he tried to correct?  It's a scary thought.

Day 99 was a Back Country Horseman Scavenger Hunt at Riverside State Park.  The BCH is one of the most quality equestrian groups out there.  They donate time and resources to preserving and maintaining our trails.  Their events are of the highest quality....but there's always someone who comes along to ruin it.

We were all given rules for the hunt--and, as you can imagine, NO RUNNING was printed loud and clear for all to see.  With 75 riders--if you have some running, it sets off the others. But run they did--splitting up and scouring the trails for their items as if their lives depended on it.

On that particular day, there was also a running marathon going through the park.  So, picture this, humans running by the hundreds--horses running---and add to that something extra special....

Yes, riderless.  They had bucked off their people and headed for the high hills--which eventually led them straight back home.

But, in the meantime, we were in the eye of the storm--me, my friend and trainer, Rebecca, who went after the runaways, and my 12 year old granddaughter.

Cowboy was a hot mess.  He wanted to run--or trot--or something that got us out of there.  So, I dismounted and had my granddaughter dismount--not knowing if the runaways would circle back to us.  Better to be safe than sorry--especially when you have your granddaughter with you.

We walked them back to the arena and waited for our friend to get back and join us again and for the horses to settle.  Then, we went back out and finished up with no more incidents.

We ended up having a wonderful time and my granddaughter won two tickets to the Spokane Symphony and a $50 gift certificate to a restaurant.  She's going to take her parents out on a date! 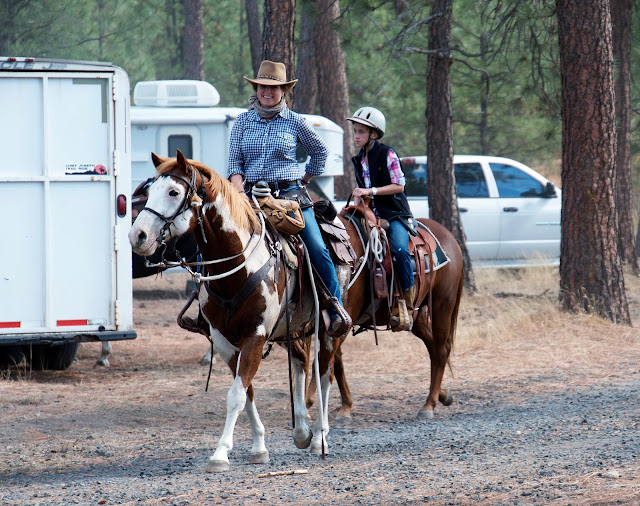 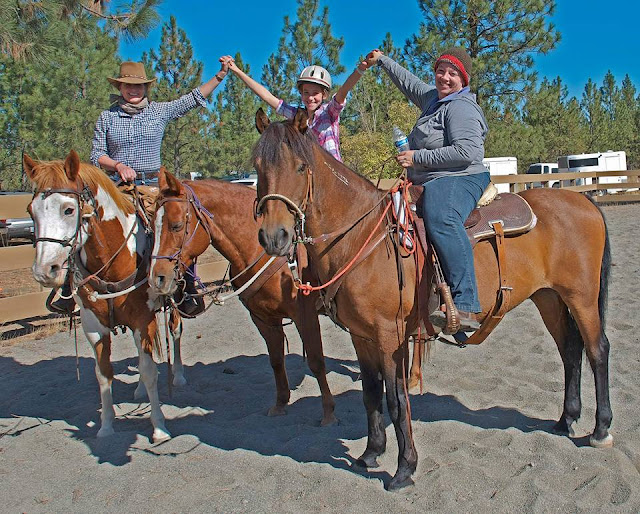 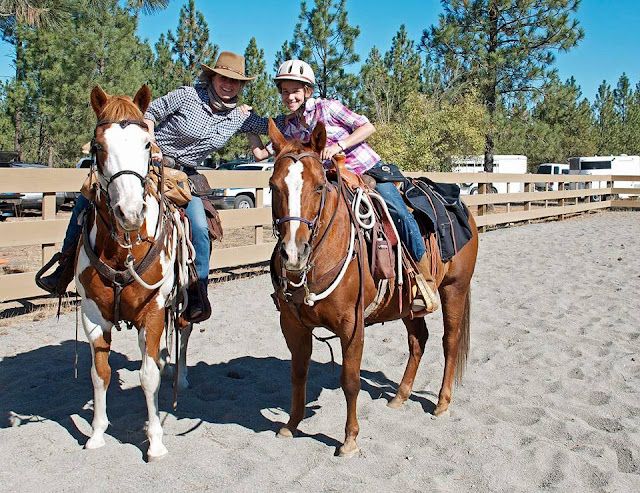 On day 100, I took Cowboy back to the park where the Scavenger Hunt was held, to prove to him, there wasn't anything to fear.  (I think he had a little horsey PTSD.  As an Omega, he has always been nervous in horse crowds!) 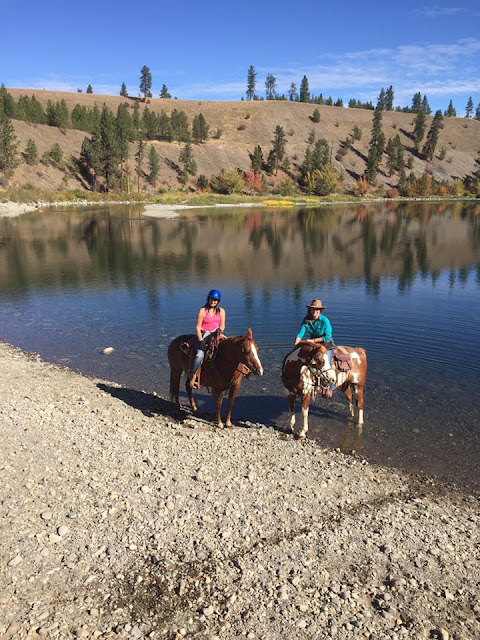 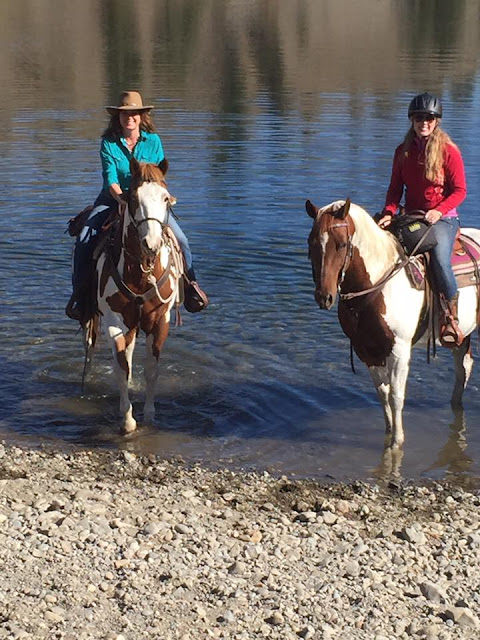 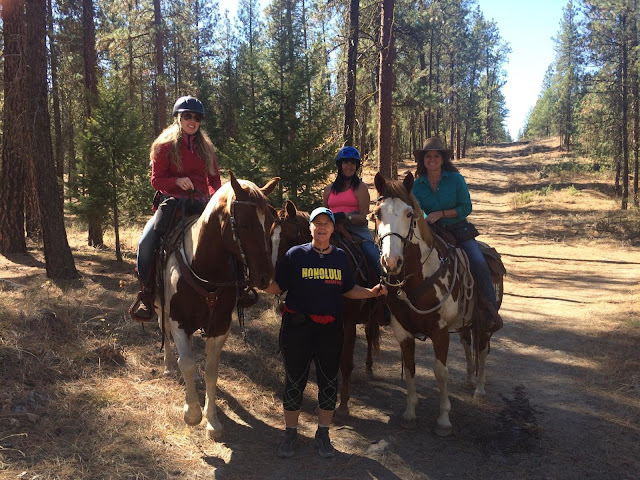 Day 100 was just a lovely, uneventful day with friends, like most of my rides in the 100 Day Challenge.

And more good news, my farrier tested Leah's hooves today and she didn't react at all.  A good sign that things are going back to normal.