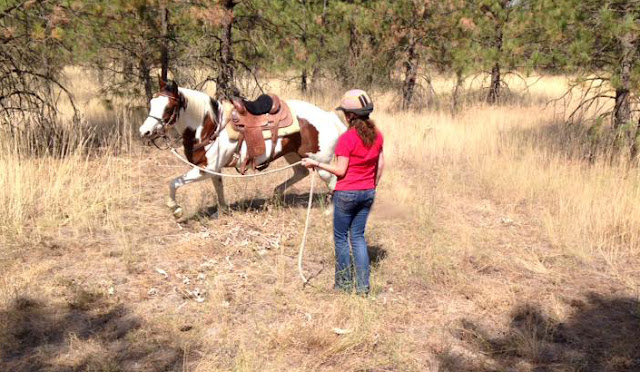 The T-Bone exercise.  It looked so simple in my hand-drawn diagram, didn't it?  But it was anything but simple in reality. It led to an impasse or, as Regina told me on the phone yesterday, a "plateau" for Leah and I.

To refresh: Leah was asked to close a gate at the state park a few weeks ago, but when she was standing on the inside, between the gate and rails, getting ready to side pass it closed, she blew to the left.  No matter how hard I tried, I could  not get her to stand there and wait for my ask to side pass.

But getting past "ONE", the ability to stand still in front of an object, revealed that Leah is a horse that feels "trapped" very easily. It explains so, so much--her bad attitude in the trailer, for example.  All part of feeling "trapped."

I've had my trainer put on a couple of rides here at home, but yesterday I took her out on the trail.  Not a good day.  When we went alongside the cliff/river/WasteWater Treatement, she wouldn't maintain a straight line and blew out to the left, off the trail, and wanted to turn back the way we came, to the trailer.

I worked with her, in saddle, until I thought that we were getting no where and, if anything, it was blowing up. I dismounted and lunged her off the trail, remounted, and returned to the trail.  That didn't work either.

My riding partner had a brilliant idea to ride alongside us on the left of Leah to block her exit.  At first, Leah tried to blow around them, but eventually it started to work and we were able to continue straight on our trail.

Parts of the trail are very narrow and steep and it's multi-use in those sections.  We encountered a family of small children who put Leah on high alert.  I got off and walked Leah through those sections, multiple times, and then remounted and rode her through.  That seemed to work great.

Back at the trail head, we ran into another friend who was starting out on her own ride.  As we were talking, I showed her what Leah was doing with the left escape.  I'd ask Leah to turn to the right, move her back hip over--she would turn. Then we'd go to the left, no problem. And then, I'd ask for the right again, but she'd fight it and pull to the left.

Is it pain going to the right?  Is it misbehavior?  I don't know.  Maybe both.

I called Regina when I got home because she hadn't heard about "The Fall" or any of this escalation.  She told me to do the T-Bone from the ground and also work on side-passing along the fence.  She said we've probably reached a new plateau--new issues--we'll have to work past.  She agreed it could also be pain and a self-preservation issue--one where is she is more willing to GO DOWN than bend.

The EHV-1 is going around our area, so Regina's barn has a no visitors policy until it's under control.  When it's lifted, she suggested I let Rachel, a trainer at the barn, ride her for a little while so that she can see what she's doing and figure out if it's behavioral or pain related.  She suspects there is an issue at her C1 & C2 that could benefit from chiropractic work.  She was very happy that I've found Rebecca to ride Leah for me and thought it would be a good idea to get her opinion about the chiropractor.

This morning I went out and did the T-Bone from the ground.  Leah was awful. She can't stand looking at the fence.  It makes her feel trapped.  She ran into it, reared, backed up--pretty much anything to avoid standing looking at it.  But eventually she stood, and then stood again, and again. We were able to end on a good note.  But WOW!  What is it about looking at the fence head on?  And man, am I happy she did all that Sh#@ from the ground, rather than when I was in the saddle.

I'm not terribly excited about this "plateau", but after this morning, I see there is some hope to get beyond it...with a lot of work.
Posted by Linda at 9:30 AM