"There are two kinds of feel and it is important to understand the difference in them. Direct feel is when you have a physical connection between you and the horse and the indirect feel is when nothing (no physical contact) is between you and the horse.  With direct feel, he learns to feel of you from that physical connection between you.  With indirect feel, he learns to feel of  you and understand what he's supposed to do from the way you maneuver around him.  This ties right in with how you present what you intend for him to do.  Most people miss out on this, because they really haven't got any idea that the way they're feeling and moving around that horse even matters to him.  But that's exactly the thing that matters the most to him."

Since I've been reading this book, I've started paying more attention to how my horses are responding, from the time I start walking out to their pasture, approach them, and leave.

As soon as we enter their sphere, we begin to put pressure on them.  Maybe it's feeding time, and they're happy to see us.  Maybe it's after feeding time, and they wonder why we're coming.  Maybe we have a rope and halter in hand, and they know they're going to be taken away from the herd.  I wanted to observe them in all those various settings and, especially, see how Leah is taking it all in and, if she's bracing or walking off, get her to be together with me.

I want my indirect feel with her to be just as good as my direct feel. 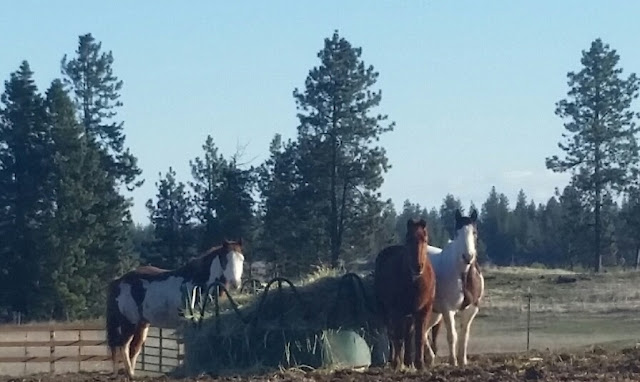 So, here is part of the herd as I start to approach from the house (outside the pasture).  Cowboy (my love), Red (the leader and love of the mare herd), and Leah (basking in the glory of Red).

As you can see, they have spotted me and are very attentive to my approach.

I went into the pasture without a halter and lead--to take that level of  pressure off.  This indirect feel was all about them and me.

First, I went to Beautiful.  She was inquisitive, bent in towards me, and nuzzled my hand.  Next, was Penny.  She's a lover girl and immediately walked over and bent in. 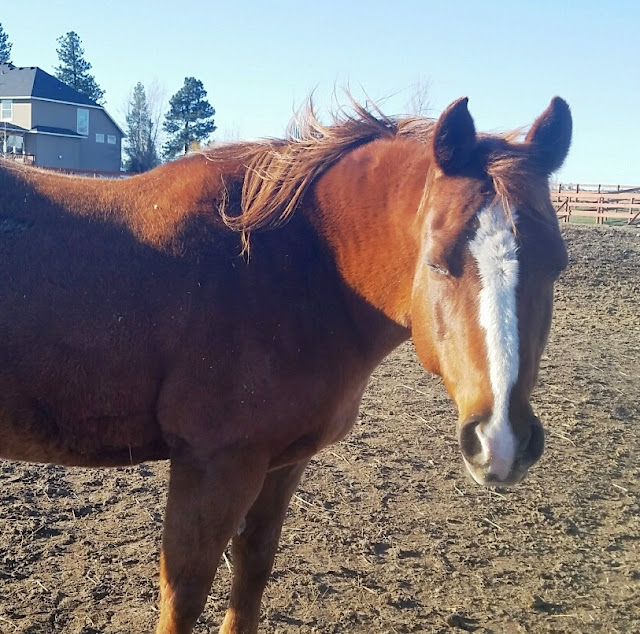 After that, it was Cowboy, who stopped eating and bent around to say hello. 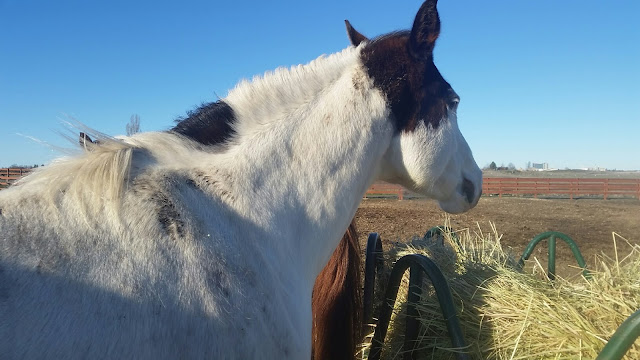 This is what I don't want, and why I'm going back to square one--the basics--indirect feel, with Leah.  She's a gentle horse.  She doesn't want a fight, but this kind of disconnection will not serve us well down the trail.

In this video, I'm doing some approach and retreat--getting her attention, and then moving away to see if she's interested in connection.  She's barely interested, but I do get some movement.


In the next video, I finally get what I want, but first, the dog behind her barked and growled and got her to react--exactly why we need that unity--if the flight had kicked in, she'd have been out of there.  Right afterward, she gives me the release and acknowledgement I'm looking for.


After that, I went to get the halter and lead rope and approached her again.  She was responsive to it.  I again worked on bringing her head down and walking off with some "float in the rope".  We went into the arena and practiced leading, stepping the hindquarters over and front end around, backing up, and the cone game (which uses a lot of the changing direction through feel.)  I tested her at the walk and trot about 4 feet out to make sure she was still maintaining the float in the rope--she was--so I progressed to saddling and bridling.

After I saddled and bridled her, having introduced another level of pressure, I started from square one in the arena, on the ground, and did all those things (above) again.

It had been over two weeks since I rode her, so I wanted to make sure we were together.

She did great.  She wasn't stiff or resistant or bracey--she was willing and gave it a lot of try.  She wasn't as straight as she had been, so we had to go back to doing circles again--and then moving out straight, but I didn't think it was bad considering she's such a green horse and had over two weeks out of saddle.  She didn't react to any outside influences--even though there were plenty to react to--our dog chasing our cat through the arena--a metal chain blowing against a metal gate--things she could have chosen to tune into--but didn't.

As I continue to read through the book, here's a list of what will be covered (below).  Dorrance suggests you have the first 7 parts done on the ground before you ever get on a horse, but it's too late for that!  LOL.  Although, I did have some of it.  Kind of like the Swiss Cheese of True Horsemanship.

Some pictures from the book about what it looks like to have float in your rope...or not. 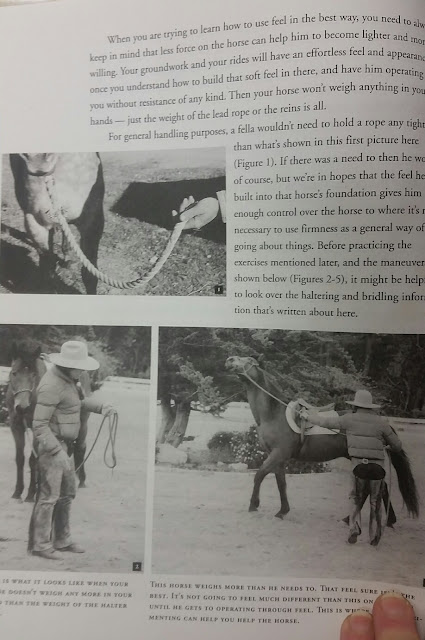 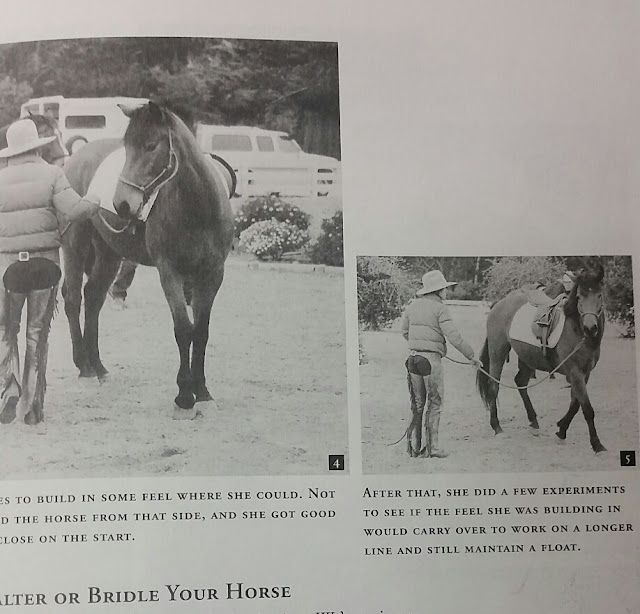 The 7 things to work with on the ground before riding your horse.

Part 1: Teaching the Horse to Adjust His Head Position
A. Lowering the Horse's head
B. Getting with the horse On the Start
C. Learning to Follow a Feel
D. Bringing the head from Side-to-Side Real Slow, with the Feet Still
E.  Learning to Wait
F.  Timing Your Releases
G. Teaching an Older Horse to Soften
H. Taking His Head Around While Mounted
I.  How Softness Can Carry Over

Part 2: Teaching Your Horse to Lead Up Real Free
A. Test Him Out
B.  Maintain Float in the Rope
C.  When His Feet Don't Move
D. Self Preservation Is Natural
E.  Misuse of the Lead Rope
F.  Using a Snaffle Bit to Help a More Braced Horse Lead Up Free
G.  One Colt that Didn't Lead Up
H. Teaching a Horse to Lead Up from Horseback

Part 3: Backing and Leading Up One Step at a Time

Part 4: Teaching the Horse to Stand and Other Important Things

Part 5:  Stepping the Hindquarters Over

Part 6:  Stepping the Front End Around

Part 8: Feeling of the Feet in Different Gaits and Lead Changes
Part 9: Trailer Loading
Part 10: Knots that are Needed for Tying Your Equipment
Posted by Linda at 3:27 PM