The Heretic's Daughter: A Read Worth Taking 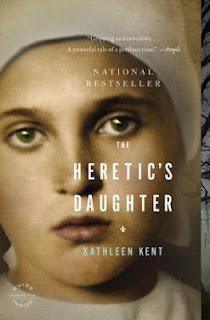 This winter I'm finishing books and trying to write reviews.  The first one is The Heretic's Daughter, written in 2008 (I'm a little late reading it, but better late than never!)  I did the review for my Emily Dickinson's Garden blog because there is so much of the natural world woven into it.  I'm sharing it here because I think many of you might like it, too.  I'm working on another review for next week that will be horse-related--a book I won on a blog giveaway!  First, Kathleen Kent's, The Heretic's Daughter.


I saw at my feet a lone birdfoot violet quivering in the wind.  The violet was a spring flower but would sometimes, if the days were kind, bloom again in the autumn.  Soon the flower would wither and die alone in the coming frost, its beauty disappearing under the first snowfall."

The Heretic's Daughter, a story sprung from the very rich soil of the family history of Kathleen Kent is, first and foremost, a story of a mother and daughter and what it means to come into an independent conscience and, ultimately, live or die for one's own conscience.  The painful conflict between what the daughter sees and what is actually happening in her mother's heart is the pulse that moves us from word to word, paragraph to paragraph, chapter to chapter.  The story is set in the New World of the late 17th century, a time of superstition, dangerous religion, prejudice, fear, and peril, and the characters follow their tragedy into the arms of it all.

Yet, lucky for us, there is a softening of the narrative terror through the natural landscape, which Kent does so well at weaving into the mean-spirited, shall we say evil,  lives of the inhabitants.  Here are two examples of metaphor and simile:


"Father's voice came to me as deep as vibrating stones."

"The air had turned thick around me and my body had grown rigid and fixed, like a splinter of oak spun in glass."

And then there's the foreshadowing:


"Hunting morels in May in the wild-apple orchard, gathering chicken mushrooms growing in stacks upon the trunks of elm and ash during the hot summer months, and picking devil's snuffbox along the banks of the Skug River.  Mushroom hunting was a slippery task, though.  You had to know the differences between the healthful mushrooms and the unhealthful ones.  Some of the differences were slight indeed.  A bit of carelessness, and death could come hiding under a milky dome or a purple gill."

What impressed me most about Kent's writing was her attention to nature and the added layers it brought.  It's so well done, it becomes a story within a story.  This description of the mushrooms reflects perfectly the events of the Salem Witch Trials.  A series of bad luck--sickness, Indian raids, fires and a long winter, then the resulting hysteria in several of the town's young women believed to be possessed by witchcraft, brings a fearful and superstitious New England population to accuse neighbors, family and friends of practicing the dark arts.  Eventually, many of these neighbors are put to death, including Sarah's mother.


"The signs are varied and subtle.  You must look carefully not just at the top of the thing but at its underside, where the poison often gathers.  The meadow mushroom when early has pink gills that turn to brown upon maturity.  If you didn't know the lore, you would liken the dark underside to unwholesomeness and the light underbelly to goodness. People, too, are not often what they seem, even those whom you love.  You must look closely, Sarah."

While reading the book, I often thought about life pre-technology, basically, life 150 years ago and the thousands of centuries beyond.  Is it possible for such superstition and cruelty to exist in a modern world?  The events of that time are not so far removed from ours as we'd like to think.  And from Emily Dickinson's world, even less.

Emily was born in Amherst, Massachusetts, a one to two hour drive from Andover, Billerica and Salem where the events of The Heretic's Daughter take place.  The book starts in December 1690.  Emily was born December 1830.  How different was her world from the one of the Salem witch trials?  Would Emily, the woman in white, the poetry writing, nature-loving spinster, have been accused?

One small portion of Kent's book brought me smack into Emily's writing.  This is the passage:


"And for the first time in my life my father held me and let my tears mix with his.  In the morning we would all rise from our beds to face the slanting light, our desperate hope partnering with us as we began the summer harvesting."

Was this a nod to Emily's, A Certain Slant of Light?


There's a certain slant of light,
On winter afternoons,
That oppresses, like the weight
Of cathedral tunes.

I like to think so.  At the very least, I walk away from Kent's narrative of the events of that summer before Martha Carrier is put to death with a much better appreciation of the oppression the family felt as their accusers moved in on them.  I also have a deeper appreciation of the compassion Sarah would eventually have for her mother.  Through the careful weaving of nature, history, geography and family legend, Kathleen Kent made me care about it all.  A wonderful, wonderful read worth taking.


"I remembered wondering long ago what song my mother's bones would make.  I had once imagined their singing would be as the crashing waves, for I knew that even the fragile ocean shell carries within it the sound of hounding surf. But what I heard was a gentle rustling, an odd whistling.  The sound the birdfoot violet makes as it grows through the early frosts of winter."