I'm not a fan of television. There was a time in my life where I didn't allow it in the house at all (that was short-lived). When I have had it, I've always wanted it banned to some nether-room of the house where I can't hear it. On school nights it has never been allowed unless we are all watching something together--which, in the past, was very rare: Modern Family, The Middle and football games were about it. (As an aside here, last spring I did get one installed in my kitchen so that I can listen to Sirius radio.)

This year I had a couple of epiphanies:

One, the computer has replaced the television as the time-sucker of choice.  Where I might feel like I've done a real service turning off the television, it seems to have been replaced with a family with their noses in their laptops and smart phones. Is that healthy?

And two, a lot of families watch shows together and then have something to talk about. Have you ever been in a room of people talking about Dancing with the Stars? Survivor? Big Brother. If you don't watch the shows, too, it sounds like this:

(Is this what people hear when I'm talking about my horses?  Please say, no.)

You kinda feel left out.

I'm still against watching too much television (and being on the computer too much), but I decided to incorporate some recurring television shows into our family activities, and I found a new one on Fox, Terra Nova, and another on DVD, Heartland.

My kids and husband were slow to follow the new trend, so I found myself sitting alone on the first few Monday nights of Terra Nova, but thanks to DVR, they were soon caught up and eagerly awaiting Monday nights at 8:00 with me.

We love this show. It has dinosaurs, science, action, romance, heroism, family secrets...everything that keeps you tuning in. Unfortuantely, though, I don't think they advertised it very well and it doesn't have the following it deserves. It may not be renewed for a second season, which would be sad.

There just aren't enough solid family shows out there where you can suspend your disbelief for an hour and be entertained. Everything today has to be "reality"...so much so that they keep looking for the more and more ridiculous realties to keep everyone's attention. Personally, I have enough "reality" of my own.

Heartland is a Candian show, so we don't get it here in the U.S. (that I know of). I had to order the first season. Let me tell you, if you're a horse lover, it's a GREAT one. It's all about horses, horse training, horse rescue, drama between horse people...horses, horses, horses.  I was crying in the first ten minutes of the first episode when the main character and her mom were trying to rescue a horse during a storm.  Sad. If you haven't seen it, you might want to check it out on You Tube. I believe they have many of the episodes uploaded there. Here's a link to the first episode--the part that made me cry.  The music is gorgeous. I became an istant, insane fan of Jenn Grant. Click here for a sample of her music. (Check out the song, Paradise Mountain.) I bought all three of her cds. 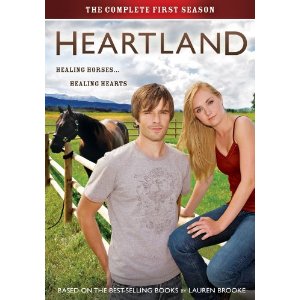 In retrospect, some of my best memories of growing up were watching television with my family--Happy Days, Laverne & Shirley, Gilligan's Island, The Six Million Dollar Man...I could go on.


Do you have any favorites you watch with your family?  How do you feel about watching television?
Posted by Linda at 5:25 PM