If You Stick Your Neck Out.... 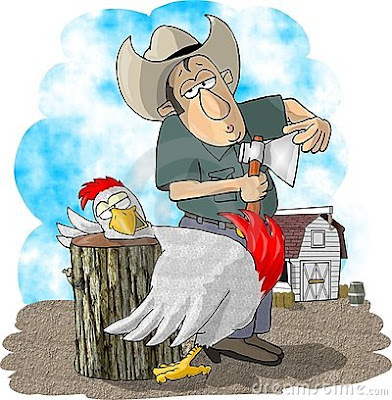 it's going to get chopped.

I know some of you have been silent during our PZP/slaughter discussions, and why shouldn't you be? We're all horse lovers: attentive, caring stewards of our animals--horse poor and getting poorer. Why heap coals upon our sacred love for the horse by inviting trouble? (And when you wade into these waters, you know there's going to be trouble.)

It appears to me, there have been more misunderstandings in the world of horses than any other. Which made me wonder last night...why?

I have a hypothesis...

I think many people love horses and are emotional about them. Horse lovers have loved horses since they were little girls and boys--they've been the fodder for their dreams, their play, eventually their lives, and identities. (Identities is the most important part of that list.) So, whenever there's a challenge to a deeply held personal horse theme--the emotions kick in and we no longer hear or see the other person as they really are. We hear what we want to hear--see what we want to see--to confirm our internal biases.

Did any of you, after reading TJ's interview, come away thinking she worked for the BLM or advocated for roundups? Though she's not a BLM antagonist and though she feels that some roundups are done better than others, she would like to see a day where they don't have to occur anymore through (limited) Mustang contraception. She doesn't want to administer PZP to the point of sterility. But the best thing about TJ is that she doesn't see ANY Mustang advocate (good sense of the word here) as an enemy. She sees us all as a team. We may have different ideas, but shouldn't we? Isn't that a good thing?

Well, enough of that. We've all been there before--misunderstood and demonized--I just don't like to see it happen to someone as sincere and hard-working (for the Mustangs) as TJ. But that won't stop me or her from getting the word out and advocating for PZP--the best compromise anyone's come up with yet.

Now a little about what's happening at my place--lighter fare. (Knock on wood) 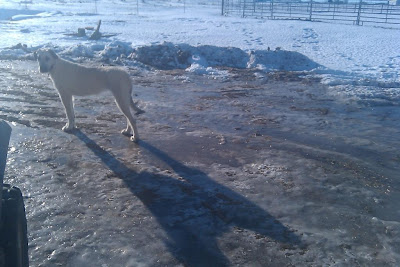 It's cold and icey. I hate ice. I love snow--hate ice. So, I've had to lock up some of the horses--especially, old Red. I really didn't mind locking him up because I've noticed he has started to drop weight. It happened quick, as it usually does for him, and probably due to the extremely low temps we've had. At this point he does best being sequestered off from the rest and given free-choice alfalfa. I'll probably keep him by himself until the temperature rises well above freezing.

We're expecting 11" of snow in the next couple of days, which I don't mind at all--especially since we're taking a trip to Texas for the weekend to see our kids. The forecast down there is for 60s-70's and rain. What a difference that will be.

My husband's outside right now moving another roundbale into the turnout. Since the temps have dropped we're burning through a round bale about every four days. It's amazing how much the horse's appetites pick up during cold spells. I have faith that they know what they need, and as long as they're healthy enough, need very little tinkering.

Old Red though, he needs some tinkering, and I'm happy to give it to him so that he becomes "Older" Red! He's at least 30 (unregistered)--but has a colorful and happy history of previous owners. We've had him for his last decade of life and have just enjoyed the stuffing right out of him. He took my daughter through her first year of 4-H and built up her horse confidence. He has also provided a safe horse back experience for every green rider who has visited our home. Now, his main job is to teach the grandkids. 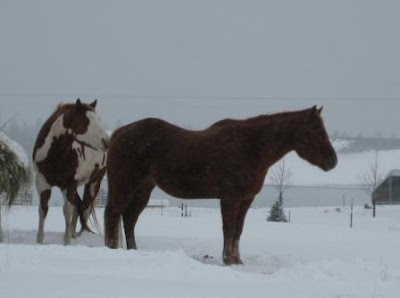 Nothing makes me happier than to see my horses growing old out here in our pastures. I figure, if Cowboy doesn't go completely lame from his P3 fracture someday--I could be riding him until I'm sixty. Beautiful and Cya--I'll be riding until I'm 70! So, isn't that a good system? Ride them while they're young (and I'm relatively young) and as they grow older and wiser, I'll be growing older and more fragile--a perfect combination.


Here's a picture of Red from this afternoon. Maybe it's just his age that makes him look thinner, because today he looked fatter to me. 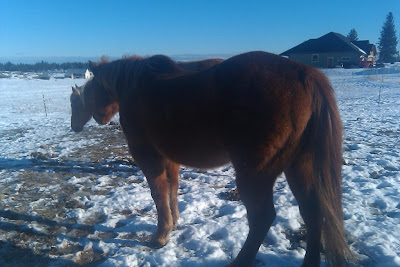 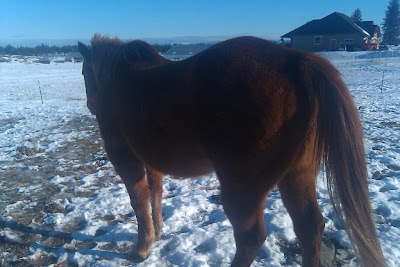 Cowboy at the bale. 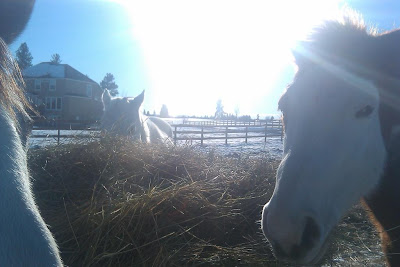 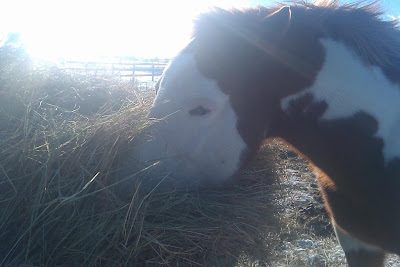 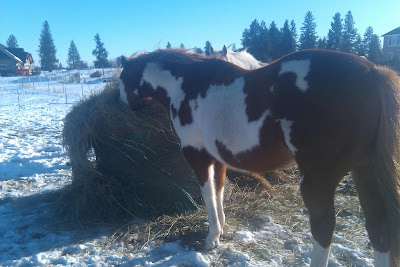 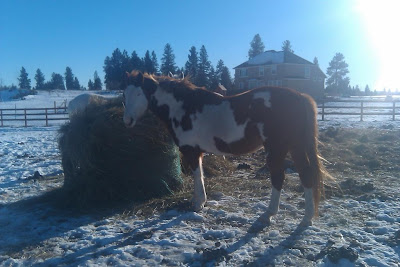 The barn sisters. Is one pregnant? 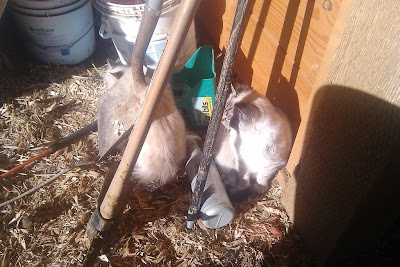 Horses at the bale today. 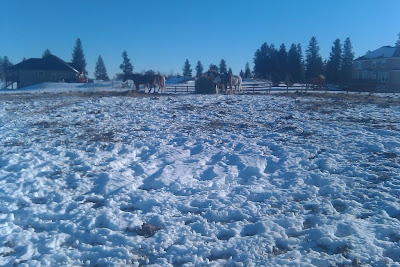