The Benefits of Being a Pickens' Mustang 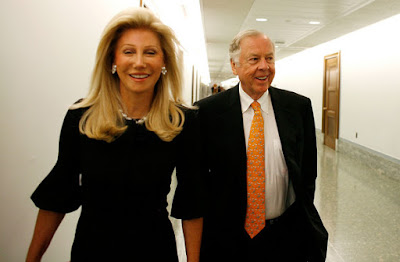 Just for fun today (since Madeleine Pickens is going to be on World News Tonight to announce her plan for the Mustangs) I thought I'd brainstorm the pros and cons of being adopted by the Pickens' and living next door to the Pickens'....
The Benefits of Being Adopted by a Billionaire (Not a measly Millionaire)
1. You meet lots of famous people (because billionaires have lots of friends, right?)
2. You get the best hay (Billionaires eat the best food, drive the best cars, do you think they'd let their horses eat crap?)
3. You get to live in some exotic location (on a million acres) near ski resorts (Billionaires like to live by their friends--so you can figure you'll be living in Jackson Hole, WY or Kalispell, Mt)
4. You'll get to be in a documentary (When was the last time someone adopted 30,000 Mustangs, my friend--some one's going to film it.)
5. You have a better chance of finding a home. (This is the "who you bought it from" theory--if you bought a horse from Robert Redford--that's a bragging point, right? The BLM--hmm...not so much. The billionaires down the road--uh huh--"I got this horse from the Pickens' in Wyoming--you know, my good friends, the Pickenses.")

The Benefits of Living Next Door to 30,000 Mustangs

1.) If you can't feed your domestic horses--you won't have to drive as far to release them into the "wild". (Just a little sarcasm pointed at the people who actually do this.)
2.) One boundary of your property would be fenced well and you won't have to pay for it.
3.) You'd meet LOTS of famous people and probably get to be in a documentary. (The part where they interview the neighbors.)
4.) You could volunteer to help with the adoption process--gentling, etc. (This is no joke--this would be the REAL fun part.)
5.) You'd get to see 30,000 Mustangs running somewhat free.

The Downside to Living Next Door to 30,000 Mustangs
1.) You'd own about 100 Mustangs before it was over because you'd fall in love with them all--and since they're in your back yard anyway--they're practically home. Hey, and the neighbors wouldn't care--they're the ones who gave them to you.
2.) You wouldn't be able to buy any hay. (With 30,000 Mustangs to feed, who's going to have any hay left for you???)
3.) All the famous people and the documentary they're shooting next door. (You moved to the country for a little peace and quiet--now you're the local "hick" in their movie.)
4.) You'd be spending all your time next door and not getting any work done at your own place.

The Downside to being Adopted by a Billionaire
1.) You're at the whim of their financial choices--(What if they became a millionaire over night and couldn't afford you anymore??)
2.) They don't understand you--(When is the last time you saw a billionaire out mucking stalls or bucking bales of hay or even grooming their own horses??)
3.) There are Grizzly Bears in Kalispell, MT.
4.) Darn, I can't think of a fourth down side to being adopted by a Billionaire. And, the first two are pretty weak since they'll be running wild anyway. Do you think they'd adopt ME??
Hmmmm...can any one tell me some down sides to being Beautiful Mustang Girl Pickens?
A Note from Tracey on her Mustang Diaries site: If you get a chance, turn on World News Tonight (tonight--Friday) and see Madeleine Pickens being interviewed about her plan to take on the over abundance of wild horses that have been in holding. Update: It just ended--she plans to buy a million acres and release them!!! Amazing!!
Posted by Linda at 8:01 AM